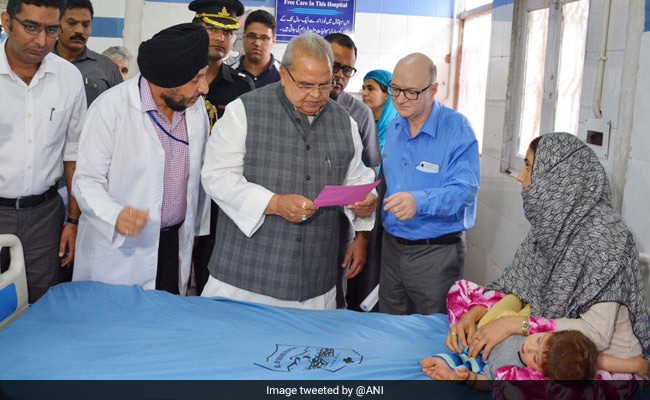 Satya Pal Malik took feedback about the medical treatment being provided to patients.

Jammu and Kashmir Governor Satya Pal Malik on Friday visited various hospitals and areas to get a first-hand appraisal of the situation, and directed that a child be airlifted from Srinagar to Delhi for better treatment, an official spokesman said.

Satya Pal Malik visited Lalla Ded Women's Hospital and GB Pant Children Hospital in Sonwar and interacted with doctors, patients and parents of children. He took feedback about the medical treatment being provided to patients, the spokesman said.

Officials informed the governor that sufficient stock of medicines was available with the hospitals and all possible healthcare services were being provided to patients.

The governor also directed Srinagar deputy commissioner to airlift a child from Srinagar to Delhi for better treatment, the spokesman said.

The governor expressed satisfaction that basic facilities were being provided to residents and ATMs were functioning properly. He was also satisfied with the whole semblance of peace and calm prevailing in the city, the spokesman said.

This was Satya Pal Malik's first assessment outing since the government scrapped the provisions of Article 370 of the Constitution that gave Jammu and Kashmir a special status earlier this week.

A massive security clampdown was ensured in Jammu and Kashmir and a communicans blackout had been effective to avoid any trouble. On Friday, the authorities relaxed the restrictions imposed on gathering of people, who participated in the Friday prayers.

The situation has remained peaceful in the state since the government move on Article 370.

Private vehicles were seen plying on city roads and people steeped out of their residences to buy articles, vegetables and fruits for daily consumption.

He also queried about arrangements at various animal mandis ahead of Eid-ul-Azha.

The divisional commissioner briefed the governor on the arrangements made for the festival and informed him about mobile vans selling essential commodities to people.

He assured the governor that adequate arrangements have been made in view of the festival.