Get Green Crackers With 30% Less Emissions This Diwali: Union Minister

Showcasing the green crackers, Union Minister Harsh Vardhan and scientists said they are available in the market at lesser cost due to the changed composition. 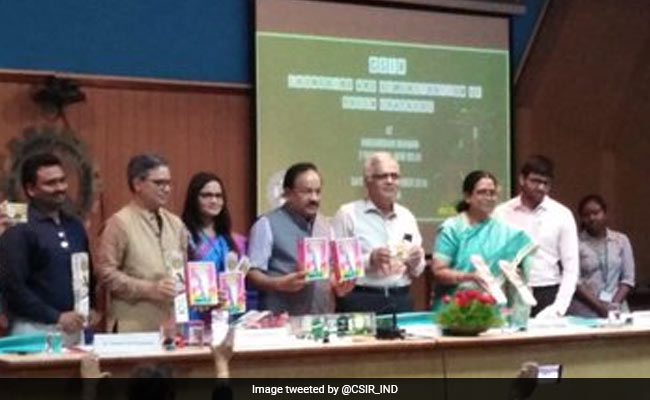 The green crackers were displayed at an event in New Delhi today.

Green crackers with 30 per cent less emissions have entered the market, Union Minister Harsh Vardhan announced today, noting that the step has been taken so that people's sentiments are taken care of without harming the environment.

The green crackers were displayed by the minister and scientists of Council for Scientific and Industrial Research (CSIR) who were involved in their making at an event.

The Health Minister said the new and improved crackers have been introduced to deal with the menace of pollution.

"I am happy to announce that we have green crackers with reduced emission by minimum 30 per cent. These are environmental friendly. We had appealed to our scientists to come up with an alternative to the polluting fire crackers so that people's sentiment are taken care of without harming the environment," the minister said.

Showcasing the crackers, the minister and scientists from CSIR said they are available in the market at lesser cost due to the changed composition.

"The green crackers will be available at a cheaper price. It will not be more than the existing ones. The composition of the chemicals has changed which has reduced their cost," said Sadhana Rayalu, chief scientist and head of environmental materials divison, CSIR-NEERI.

The scientists, however, did not reveal the exact price of the new crackers.

In 2018, just before Diwali, the Supreme Court had banned manufacturing of polluting firecrackers and ruled that only green crackers with reduced emission will be be allowed to be sold in the country in order to control the pollution level.

The court had passed the order after the Centre had suggested that emission level in crackers could be reduced by changing the chemical composition and termed it green crackers. However, most manufactures and sellers were left clueless at that time and hardly any green crackers were available in the market.