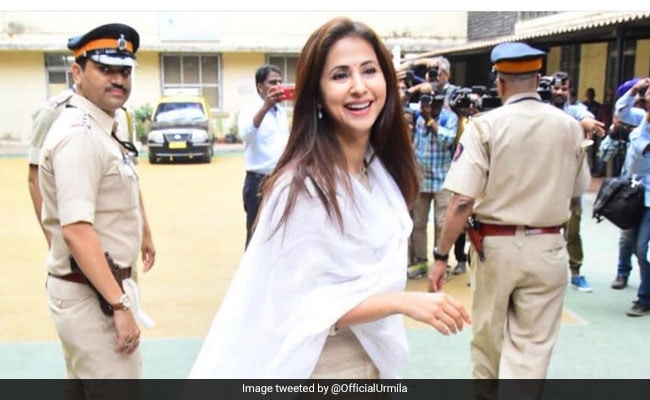 Actor-turned-politician Urmila Matondkar today cast her vote in Bandra in the Mumbai North constituency and urged fellow voters from across the country to cast theirs with intelligence and without fear.

The Congress candidate for the seat is up against BJP leader Gopal Chinayya Shetty, who is hoping to repeat his 2014 win. Mumbai's six Lok Sabha constituencies went to polls on Monday, in the fourth phase of the ongoing general elections. The results are likely to be declared on May 23.

Speaking to NDTV, Mr Matondkar laughed off claims that the ongoing election represents a trial by fire, saying, "This is not just a test for me but the voters too... they have to make a wise decision to ensure a bright future".

Nothing feels better than making a contribution towards your country and carrying out your civic duty of Casting a Vote. Do your duty. ???? pic.twitter.com/DPB7gW5gb8

The actress also said she was more excited than scared on voting day, dismissing suggestions the Congress fielding her was more about cashing in on her popularity than anything else.

"Scared? No. Why should I be scared? I'm excited. I feel that if you love your country and want the best for it, practicing politics is natural. All of us practice politics in some way or the other".

The star of hits like Rangeela (1995), Judaai (1997) and Mast (1999), she earlier acknowledged that having been an actress meant she carried expectations into the political ring.

Those fears were played on by Mr Shetty, who described Ms Matondkar as being a "naive girl, zero in politics".

Ms Matondkar did not shrink from a fight in her first election though, launching sharp attacks on Prime Minister Narendra Modi as part of her campaign. She mocked PM Modi over the controversial biopic on his life - PM Narendra Modi - calling it a "joke".

Asked if the contest was a difficult one, Ms Matondkar responded by quoting a poem by the late Harivansh Rai Bachchan to say that those who tried to accomplish something great do not really lose.