Elections 2019: Urmila Matondkar, a popular actor, joined the Congress last month. She would take on the BJP candidate Gopal Shetty, who is also the sitting parliamentarian from the constituency. 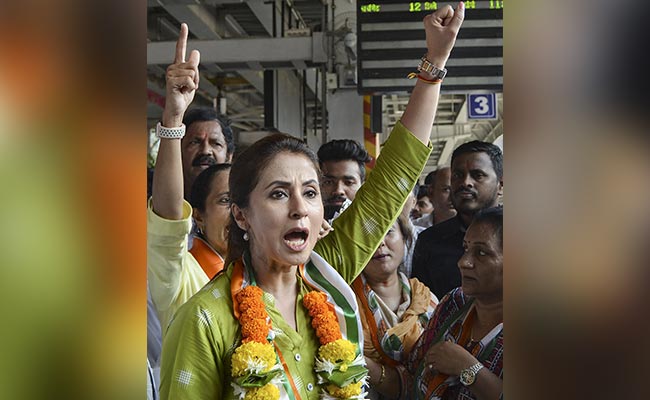 Actor-turned-politician Urmila Matondkar on Thursday took a savage dig at Prime Minister Narendra Modi, saying he didn't deserve a biopic as he failed to deliver anything as the head of the government. Ms Matondkar, who is contesting the national election in Mumbai North as a Congress candidate, further said a comedy film should be made on the PM.

"The biopic made on his (PM Modi's) life is nothing but a joke as the prime minister, who claims to have a 56-inch-chest, has miserably failed to deliver anything. The movie made on his life is a joke on the democracy, poverty and diversity of India, which has been damaged," Ms Matondkar was quoted as saying by news agency PTI.

"Rather, a comedy film should be made on him and his unfulfilled promises," she added.

Actor Vivek Oberoi, a self-proclaimed fan of PM Modi, starred in a film titled "PM Narendra Modi", which hit a roadblock as the Election Commission stayed its release until the national election was over, saying it may disturb the level playing field in polls.

Incidentally, Mr Oberoi had made a similar comment on the Congress president Rahul Gandhi in an interview to NDTV.  "Why should I make a biopic on Rahul Gandhi? What has he done that is noteworthy," he had said. "I'd have to shoot most of the film in Thailand," he had further added.

Urmila Matondkar, a popular actor, joined the Congress last month. She would take on the BJP candidate Gopal Shetty, who is also the sitting parliamentarian from the constituency.

"What can be worse than a prime minister of a democratic country not holding even a single press conference in the last five years," she added.

Maharashtra will go to polls in the first four phases, beginning April 11. Results of the polls will be declared on May 23.