Lok Sabha Election 2019: Sunny Deol is the third from his family to join the BJP after his father Dharmendra and stepmother Hema Malini 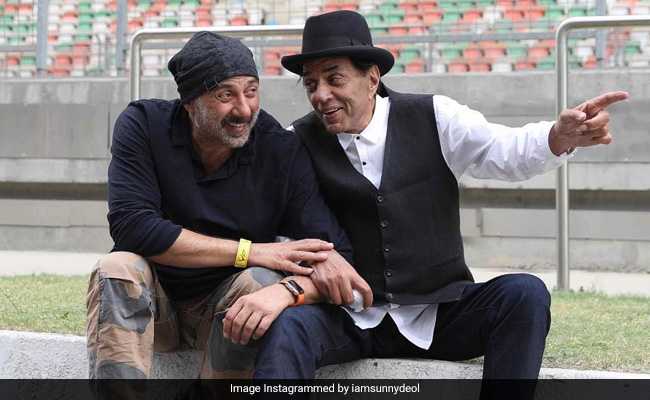 Election 2019: Dharmendra said Sunny Deol will serve the country like he did in Bikaner

A week after actor Sunny Deol joined the BJP, his father and veteran actor Dharmendra - a former BJP leader himself - said that while his family was not very well versed in politics, patriotism ran in their blood. "We don't know the ABC of politics but patriotism is in our blood, we will serve the nation," the 83-year-old actor said.

"See the work that I did in Bikaner. Sunny will also serve the nation," Dharmendra told news agency ANI. Dharmendra had contested the 2004 national election on a BJP ticket from Bikaner and won.

Sunny Deol, who will contest the Lok Sabha Election from Punjab's Gurdaspur, also had something to say along similar lines. "Look, I do not know much about politics but I am a patriot," Mr Deol said in a rally after filing his nomination in Gurdaspur on Monday.

Sunny Deol is the third in his family to take the plunge into politics. Apart from Dharmendra, his stepmother Hema Malini is a sitting BJP lawmaker who is currently seeking re-election from Uttar Pradesh's Mathura.

Sunny Deol had mentioned Dharmendra when he joined the BJP. "Like my father joined Atal Bihari Vajpayee, I have decided to go with Prime Minister Narendra Modi. I want PM Modi for the next five years," he told reporters after the BJP announced his induction into the party.

Sunny Deol is up against Congress candidate and sitting MP Sunil Jhakhar, who is also the president of the grand old party in Punjab.

In his short time in politics, the 62-year-old actor has already become involved in a controversy. The Gurdaspur seat, a BJP stronghold, was represented by the late actor-turned-politician Vinod Khanna in 1998, 1999, 2004 and 2014. After his death in 2017, there was speculation that his wife Kavita Khanna would get the party's nomination from the seat, but after the BJP announced Mr Deol's nomination, Ms Khanna made her reservations clear.

"The BJP and my Prime Minister have my support, but at the same time I have to insist that what has happened with me can absolutely not happen again," she said. Despite her protests, however, she clarified that she was not going to take advantage of the situation. "I want Gurdaspur to go to the Prime Minister's kitty," she had said.

Punjab will vote on May 19 in the last phase of the national election. Results will be out on May 23.