The Mahanadi Coalfields Limited (MCL) suspended a senior manager for his alleged negligence that led to the accident. 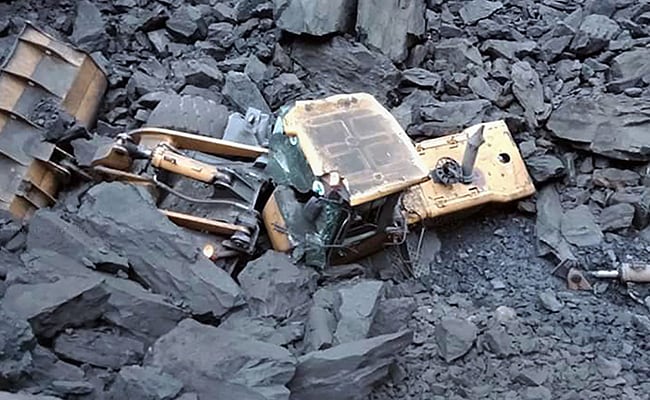 The mine workers were killed in a dump slide at the Bharatpur opencast mine in the Talcher coalfields.

The number of deaths in the coal mine accident in Odisha's Angul district rose to four on Saturday with the recovery of one more body, officials said.

The Mahanadi Coalfields Limited (MCL) suspended a senior manager for his alleged negligence that led to the accident.

The mine workers were killed in a dump slide at the Bharatpur opencast mine in the Talcher coalfields on Tuesday.

"The rescue team today (Saturday) found mutilated body parts of another person from the debris. With this recovery, the toll in the Tuesday night's mishap has reached four," said Angul district sub-collector Paresh Nayak.

The victim was identified as Ramesh Das, a security guard, who belonged to nearby Nakeipasi village, Nayak said.

Nine injured workers were rescued immediately after the accident had occurred and are undergoing treatment at the company's hospital in Talcher.

While bodies of Supervisor Rashmi Ranjan Behera and Pump Khalasi Raj Kishore were recovered on Friday, the body of one Pupun Biswal, a worker of the contract firm was found on Wednesday.

Meanwhile, the MCL, a subsidiary of Coal India, said it has suspended a senior manager of the mine, following the deaths of workers in the accident.

"V K Singh, Senior Manager (Mining), Bharatpur open cast mine, has been placed under suspension with immediate effect in connection with strata failure that triggered a massive landslide in the mine on Tuesday night," a senior official said.

Following the accident, coal production in all the 10 mines of Talcher Coalfield area remained suspended for four consecutive days on Saturday, the official said.

An inquiry committee, under the supervision of the general manager (safety and rescue) of the MCL, has started a probe to ascertain the cause of strata failure.

Bharatiya Janata Party activists of Talcher area have been agitating near office of the Bharatpur open cast mine demanding a compensation of Rs 50 lakh for the families of each of those killed.

Chief Minister Naveen Patnaik had announced a compensation of Rs 5 lakh each to the next of families of those killed in the incident.

The MCL will extend a financial assistance of Rs 5 lakh each to the family of those killed, along with gratuity, provident fund, full compensation as per the Employees Compensation Act and benefits under the Coal Mines Pension Scheme, a company spokesperson had said.