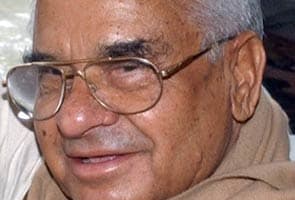 Hisar: The last of the three Lal's of Haryana - Bhajan Lal, who formed the trio with two other former Chief Ministers Bansi and Devi Lal - died here at the age of 81 following a massive heart attack.

Besides being a three-time chief minister of Haryana, Bhajan had also been a Union Minister at the Centre.

The trio, Bhajan, Bansi and Devi, are credited with taking the state on the path of development after the bifurcation of Punjab in 1966. Between 1968 and 99, the three held the Chief Minister's post among themselves.

Born on October 6, 1930, Bhajan received formal education at Bahwal Nagar (Pakistan). A farmer by profession, he started his career from the lowest ladder in the political hierarchy. He became Sarpanch, then Chairman of Panchayat Samiti, Hisar for five years and later President of Congress Mandal in the same region for four years.

The victory of the Congress in Haryana's 2005 polls caused a major rift in its state unit, as it opted to make a Jat leader Bhupinder Singh Hooda, the Chief Minister, instead of Bhajan whose son Chander Mohan was made Deputy Chief Minister as part of a compromise formula.

After losing the race for chief ministership in 2007, Bhajan's son Kuldeep Bishnoi formed a new party, called Haryana Janhit Congress-BL. Kuldeep was later suspended from the Congress for his alleged anti-party activities.

The veteran politician knew how to swing things in his favour. In 1982, despite being in a minority, the Congress was invited to form the government by then Haryana governor G.D. Tapase, forcing a fuming Devi Lal, who later became India's Deputy Prime Minister, to slap the governor.

Bhajan was elected to the Haryana Assembly for the first time during the mid-term elections of 1968 from Adampur Constituency. Except in 1987, when his wife Jasma Devi won from Adampur after he moved to the Centre, he always won the seat.

Out of the eight elections for Adampur from 1968 to 2005, Bhajan contested on a Congress ticket except in 1977 when he contested on a Janata Party ticket.

Bhajan was elected for the first time to the Haryana Assembly during the mid-term elections of 1968 from Adampur in Hisar district. He retained the seat in 1972. He was a minister in the Haryana Cabinet from 1970 to 1975.

In 1977, he was again elected to the Assembly from the same seat and was made Minister for Cooperation, Dairy Development, Animal Husbandry, Labour and Employment and Forests during 1978-79.

Before taking over as Chief Minister of Haryana on June 28, 1979, Bhajan Lal during his upward climb to the highest chair in the state acquired not only organisational and administrative experience, but also knowledge of men, matters and problems faced by the people.

Having suffered many vicissitudes of fate as a politician, statesman and development officer, he successfully piloted and launched a number of development schemes for the benefit of the people.

Bhajan was elected for the fourth time from the same constituency in the 1982 General Elections and was again sworn in as Chief Minister on May 23, 1982. He remained Chief Minister till June 4, 1986.

Later, he was elected to the Rajya Sabha and served in the Union Cabinet, holding the Agriculture and Environments & Forest portfolios during Rajiv Gandhi's government.

He has been a central point in Haryana politics, representing the non-Jats of the state.

He was elected to the Lok Sabha from Faridabad seat in November 1989.

Bhajan was elected to Haryana Assembly from Adampur in June 16, 1991 for the fifth time.

The hold of Bhajan's family over the Adampur assembly seat remained with the veteran winning the bye-election in May 2008 by a margin of 26,188 votes over his nearest Congress rival Ranjit Singh to retain the seat for a record 11th time.

Promoted
Listen to the latest songs, only on JioSaavn.com
He had won as a Congress nominee in 2005 by a margin of 71,081 votes, but the margin decreased in 2008.

With the entry of Bhajan, HJC-BL opened its account in the 90-member Haryana Assembly in 2005.