Tejashwi Yadav also attacked Nitish Kumar for for his claim that Amit Shah had asked him "twice" to induct former poll strategist Prashant Kishor into the JDU. 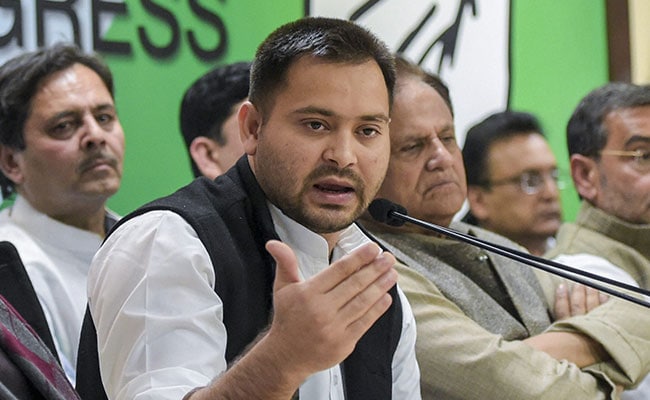 RJD leader Tejashwi Yadav on Wednesday launched a blistering attack on Bihar Chief Minister Nitish Kumar for attributing his exit from the Grand Alliance on the inability of Congress president Rahul Gandhi to take a stand on corruption.

"No one in Indian politics matches the standards of Nitish Kumar ji. He is not only politically, morally or socially scandalous, but ''Bhishma Pitamah'' of moral corruption. You will never find him accepting his blunders. He blames partners as well as opponents for his mistakes," Mr Yadav, whose party lost power on account of Kumar''s exit, tweeted.

At an event organised by a private news channel in Patna on Tuesday night, the chief minister had accused Mr Gandhi of not taking a stand when his state government was rocked by corruption allegations against Mr Yadav, who was then the deputy chief minister.

Mr Kumar had alleged that Gandhi balked at issuing even a statement, which could have compelled him to have second thoughts about leaving the Grand Alliance of his Janata Dal (United), Rashtriya Janata Dal and the Congress, and returning to the NDA.

Congress leaders have, so far, remained tight-lipped on the claim by Mr Kumar, who had also alleged that the RJD , despite being an old ally, was averse to give more seats to the Congress in the 2015 assembly polls and it was at the insistence of the JD(U) that it got 40 and ended up winning 28 its best ever performance in the 243-member house.

The younger son of RJD supremo Lalu Prasad, also took potshots at Mr Kumar for his claim that BJP chief Amit Shah had asked him "twice" to induct former poll strategist Prashant Kishor into the JDU.

The chief minister, who also heads the JDU, had made the claim while dismissing speculations that Kishor, who joined the party in September and was elevated to the post of national vice-president within few weeks, could be his political successor.

"Finally Nitish Kumar admits that JDU is advanced version of BJP (and) therefore he is giving all important organisational posts except him(self) to the people chosen by Sh Amit Shah," Mr Yadav remarked sarcastically in an earlier tweet.

"Hope now you understand why mob lynchings and state sponsored crimes have become a routine practice in Bihar," he added.

Since his return to the NDA, Mr Kumar has been drawing flak from the RJD-Congress combine for allegedly compromising on his stand against communalism, which had led him to snap his 17-year-old ties with the BJP in 2013, soon after the party announced the then Gujarat chief minister, Narendra Modi, as the chief of its committee for the Lok Sabha poll campaign.