Five-year-old Mahi stuck in borewell for over 72 hours, rescuers still struggling to reach her 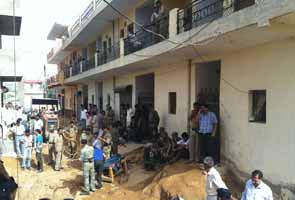 Gurgaon: It's been more than 72 hours, but five-year-old Mahi Upadhyay still remains trapped inside a 70-feet borewell she fell into on Wednesday night in Khaow village close to Gurgaon. A team from the Metro has now been called in to help assist in the rescue operation.

The Metro officials are trying to find a fresh route to reach Mahi after efforts to get to her through an alternate pit, which has been dug, slowed down. Her rescuers said she was within millimetres of them, but the presence of a hard rock in between has prevented them to reach her. There is a likelihood of her getting injured by either the machines or the mud and rocks which is why the last few millimetres require extreme caution, they said. The rock was encountered at midnight.

The Metro team is specifically helping to find the size of that rock, by tracking it through a radar system.

Reliance Industries which is also helping in her rescue have brought in machines that have zeroed in on her but there has been no movement detected.

Doctors on standby are hoping that she's just fallen asleep or is unconscious. They say that even a five-year-old can go on without food and water for three days, but after that the chances become slim.

Early this morning the operation to pull her out began again, after it had to be stopped last night due to the presence of rocks that was blocking the area where she is stuck.

Officials say the team could not use a drill as it could harm her. So since morning, they have been trying to remove these rocks manually.

More than 100 officials from the Army, Police, National Security Guards (NSG), Fire Brigade, Gurgaon civic authorities, Gurgaon Metro Rail services and Reliance Industries have been involved in trying to get her out.

The Gurgaon metro authorities even brought in a drilling machine that is used by them to bore holes in the ground to erect pillars for the metro. This machine was used to dig a parallel shaft that is being used in efforts to reach Mahi through an underground tunnel.

Promoted
Listen to the latest songs, only on JioSaavn.com
But even the presence of this big machine has not brought any good news. The machine is being used very slowly as authorities fear that the ground could cave in if it's used without caution. The extreme heat and humid conditions are also making the operation difficult to carry out.

The police are also looking for the contractor who dug the borewell and left it uncovered, but with each hour passing, hope for Mahi is dwindling away.