Harpreet Singh Mattu said his friends helped him in making his makeshift home, which took one and half days to complete. 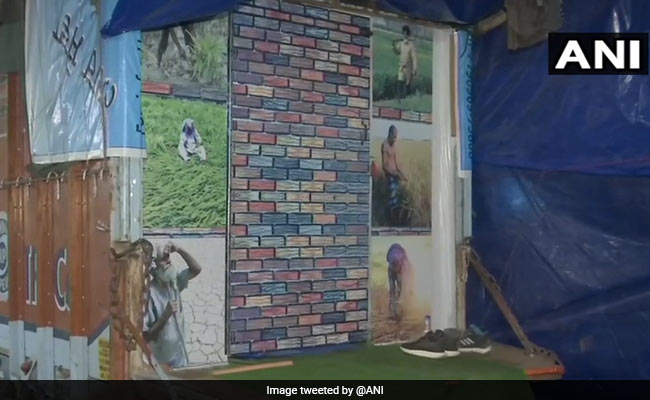 Jalandhar-based farmer has turned a container truck into a fully equipped temporary home.

A Jalandhar-based farmer who has been protesting at the Singhu border against the three agriculture laws has turned a container truck into a fully equipped temporary home.

Harpreet Singh Mattu's temporary accommodation has all basic amenities like a sofa, bed, TV and even a functional toilet along with mobile charging points.

"I came here on December 2 at the behest of my elder brother who based in the US. He asked me to serve the farmers. I left all my work and served for seven days at the Singhu border. Earlier five of my trucks came here and when I came back to my a hotel, where I was staying at that time, I felt homesick and then I thought why not turn a truck into a makeshift apartment," Mr Mattu told ANI.

Delhi: Jalandhar based farmer protesting at Sighu border turns a truck container into a residence

"I came here on Dec 2 to do langar sewa. I left all my work & served for 7 days at Singhu border. I felt homesick & then decided to turn a truck into a makeshift apartment," he says pic.twitter.com/FIsmkzeJS7

He said his friends helped him in making his makeshift home, which took one and half days to complete.

"In my Langar tea is served round the clock, from morning till evening. Pinni, pakodas, almond langar is also served there," he said.

Mr Mattu claims that his Lanhar Seva witnesses a footfall of more than 10,000 people each day.

The Jalandhar-based farmer is accompanied by his wife, son, nephew, and team of around 80-90 helpers at the site.

Farmers have been protesting at different borders of the national capital for over a month against the Farmers' Produce Trade and Commerce (Promotion and Facilitation) Act, 2020, the Farmers (Empowerment and Protection) Agreement on Price Assurance and Farm Services Act, 2020, and the Essential Commodities (Amendment) Act, 2020.