"Arrest Me If You Can": Tejashwi Yadav Dares Nitish Kumar Government

Bihar leader of Opposition Tejashwi Yadav has hit out at the Nitish Kumar government, daring it to arrest him for protesting in support of farmers' demands to repeal the recently enacted three contentious laws. 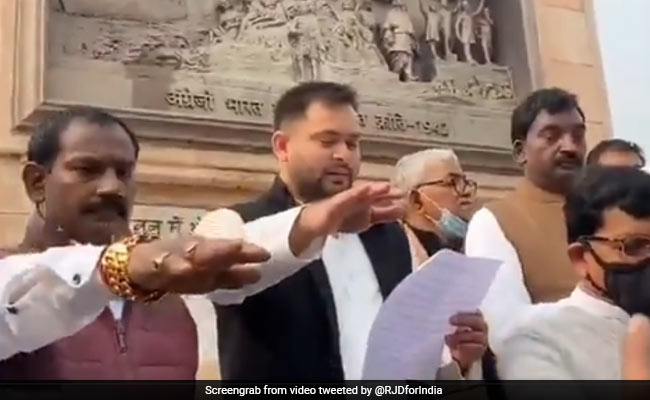 Rashtriya Janata Dal's Tejashwi Yadav has hit out at the Nitish Kumar government, daring it to arrest him for protesting in support of farmers' demands to repeal the centre's three contentious laws.

A case has been filed against the Mr Yadav and 18 other leaders from various constituents of the Grand Alliance-led Opposition in Bihar for protesting without permission amid the coronavirus pandemic.

"The government of Bihar, led by a cowardly chief minister, has lodged an FIR against us for raising the voice of the farmers. If you have any real power, then arrest us. If you do not, I will surrender myself. I am ready to be hanged for farmers," the Leader of Opposition in Bihar tweeted.

His party also criticised the National Democratic Alliance government for using "false pretexts" to book Mr Yadav for standing in solidarity with the farmers who have been camping along Delhi's borders in harsh cold for 10 days now.

"The Bihar government has shown its two-faced character by using false and shallow pretexts to book Tejashwi Yadav for standing with the farmers and protesting in their support. For farmers, we are not scared of even a thousand such FIRs," the party proclaimed.

Earlier on Saturday, the RJD, also tweeted a picture of a meeting held in the BJP office, where social distancing norms were not observed.

Highlighting that the meeting was attended by Health Minister Mangal Pandey, among others, the party criticised the ruling coalition partner for not permitting opposition leaders to protest but failing to themselves observe any Covid-safety norms.

On Saturday, despite not getting permission, the Opposition parties held a demonstration in Patna's Gandhi Maidan, where they took an oath to protect "at any cost the interest of farmers across the country".

Led by Mr Yadav, they also extended support to the nationwide strike called by the farmers' organisations on December 8.

The case that was filed against them under various sections of the Indian Penal Code and Epidemic Diseases Act also includes 500 unidentified people.