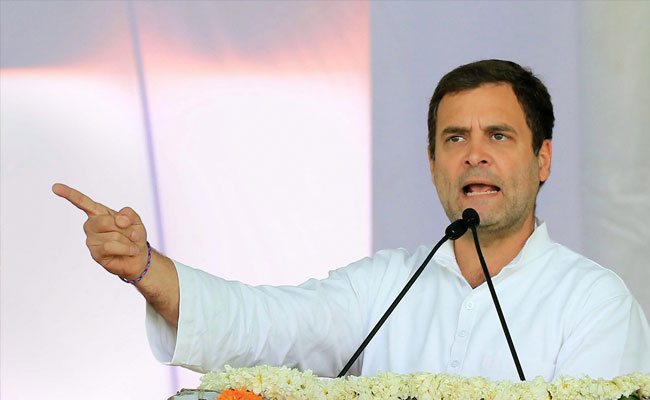 Farmers staged a protest and raised slogans against Congress president Rahul Gandhi in his parliamentary constituency Amethi in Uttar Pradesh.

The farmers protested in Gauriganj town in Amethi district on Wednesday demanding that either their land that was given to Rajiv Gandhi Foundation should be returned or they are provided employment.

One of the protesters, Sanjay Sing told ANI: "We are very upset with Rahul Gandhi. He should go back to Italy. He does not deserve to be here. Rahul has grabbed our land."

They staged the protest near Samrat Cycle factory, which was inaugurated by former prime minister Rajiv Gandhi when he was the Lok Sabha lawmaker from Amethi.

In the 1980s, Jain brothers had taken over 65.57 acres of land in the industrial area of Kausar to run a company but after its failure, a land auction took place in 2014.

According to the records, UP State Industrial Development Corporation (UPSIDC) had leased 65.57 acres of land to the company in 1986 but when the company was closed down, the Debts Recovery Tribunal got it auctioned in 2014 at Rs. 20.10 crore to recover the loan.

The land purchased in the auction was paid by the Rajiv Gandhi Charitable Trust for stamp duty of Rs. 1,50,000.

However, later the land auction process was termed invalid by the UPSIDC after which a Gauriganj SDM Court ordered the return of the land of the Samrat Cycle Factory to UPSIDC.

Since then the land is on papers with UPSIDC but is still occupied by the Rajiv Gandhi Charitable Trust.

Earlier, Union Minister Smriti Irani had also accused Rahul Gandhi of grabbing the land of farmers through the foundation.

The Congress scion has, however, always pitched for farmers' welfare and even promised to waive their loan in his election speeches.