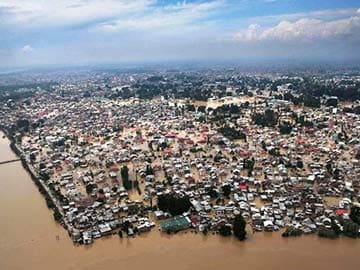 New Delhi: The Supreme Court today said the government should ensure that the flood-affected people of Jammu and Kashmir get food, fuel, drinking water and medicines, and that their damaged houses are restored as it concerned their right to life under article 21 of the constitution.

Noting the steps taken by the government for relief and rehabilitation of the flood-affected people, the top court said, "We believe whatever has been stated therein must have been done or are being done. The question is whether the steps that have been taken or are being undertaken for relief and rehabilitation are adequate to meet the requirements of the affected people."

The bench of Chief Justice RM Lodha, Justice Kurian Joseph and Justice Rohinton Fali Nariman said this as counsel Colin Gonsalves told the court that in six districts - Pulwama, Kulgam, Anantnag, Budgam, Baramulla and Srinagar - there was no supply of medicines or there was acute shortage of medical supplies and doctors.

In many places, Mr Gonsalves said, doctors were not available at all.

The waste management system has also become dysfunctional in most of the districts, he said.

The court recorded a statement by Attorney General Mukul Rohatgi that the union health secretary would get in touch with the heath secretaries in the states and union territories for making available doctors, medical equipment and medicines to treat the flood-affected people.

The court said lack of sanitation/hygiene may be an invitation to epidemics and deserves to be tackled urgently.

"We are also concerned about inadequate sanitation/hygiene facilities since we were informed that most of the affected places do not have proper sanitation and waste management in place, and rather whatever was in place prior to the floods, has become dysfunctional," it said.

The court also recorded a statement by Gaurav Pachnanda, additional advocate general for Jammu and Kashmir,  that immediate steps will be taken in making the waste management system functional and other necessary steps for sanitation/hygiene.

The bench said that now since water has receded substantially and most of the areas are not inundated in Srinagar, the state government may also take steps for ensuring adequate supply of fuel for cooking.

Promoted
Listen to the latest songs, only on JioSaavn.com
Directing the matter for further hearing on September 24, the court asked the Kashmir government to file a report on the steps taken for making available food, fuel, medicines, drinking water and restoration of damaged houses till September 23.

The court's order came on the petition by advocate Vasundhara Pathak Masoodi and the Jammu and Kashmir National Panthers Party highlighting the plight of the flood-affected people and seeking the court's intervention for immediate and adequate relief for them.