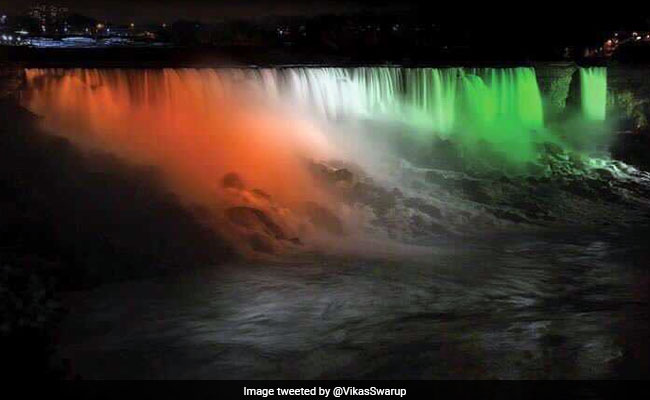 The iconic Empire State Building and Niagara Falls were illuminated in the colours of the Indian flag to mark India's 72nd Independence Day with the Indian community in the US celebrating the occasion, showcasing the country's rich cultural heritage and history through a plethora of events.

A special ceremony was organised at the world-famous skyscraper in New York's midtown Manhattan for lighting it up in saffron, white and green.

"Happy India Day from New York City! Together with the Federation of Indian Association, we're honouring India's Independence Day by recreating the Indian flag in lights tonight," the twitter handle of the Empire State Building, the 1,454 feet-tall building with 102 stories, said in a tweet.

The Niagara Falls, arguably the world's most breathtaking waterfalls and one of the most visited tourist spots globally, was also illuminated in saffron, white and green to mark India's Independence Day.

The Indian diaspora in the US celebrated the Independence Day with patriotic fervour and zeal, showcasing the country's rich cultural heritage and history through a plethora of events across America.

In Washington, the Indian Embassy organised a flag-hoisting ceremony at the embassy residence. The ceremony was attended by members of the Indian community in large numbers.

India's Ambassador to the US Navtej Sarna unfurled the tricolour, after which those present sang the National Anthem.

Mr Sarna then addressed the guests and as a custom, read out President Ram Nath Kovind's address to the nation. He also handed out prizes to the children of the Indian diaspora who participated in singing of patriotic songs and speech competition on the topic 'India of My Dreams', organised by the Embassy as part of 'India@70' celebrations.

A brief cultural programme involving rendition of patriotic songs by school children was also organised to mark the occasion.

India's permanent mission to the UN and the Indian consulate in New York also hosted events to mark the occasion.

India's envoy to the UN Ambassador Syed Akbaruddin hosted the festivities at the Permanent Mission of India to the UN.

Following the unfurling of the tricolor at India's consulate in New York, Consul General Chakravorty addressed the gathering.

The event was attended by about 200 people including prominent members of the Indian community and local dignitaries including Congresswoman Grace Meng, Assemblyman David Weprin, Assemblyman Raj Mukherjee and Senator Vin Gopal.

A short cultural programme was also organised by the Bhartiya Vidya Bhavan, including singing of patriotic songs and poetry recitation.

The Indian Council for Cultural Relations (ICCR) sponsored a seven-member group consisting of acclaimed Kathak dancers - Sandip Mallick and group with Anuj Mishra and group that presented a Kathak performance at the consulate.

The team in collaboration with the consulate and the famed Battery Dance Company performed in the city later in the evening.

Independence Day celebrations were also held at the consulates in Chicago, Houston, Atlanta.

On August 19, the FIA will organise the 38th India Day Parade that will run through several streets of Madison Avenue in the heart of Manhattan, featuring tableaux by various Indian-American organisations, marching bands, police contingents and cultural performances by young Indian-American children.

Mr Parikh has said he expects about 150,000 people to attend this year's cultural extravaganza, which will feature 35 floats and 30 marching contingents as well as dance performances such as Bihu and Lavani showcasing India's regional diversity.

Mr Parikh said the parade's central message will be 'Vasudhaiva Kutumbakam - the world is one family' and will bring together for the first time communities from other South Asian and Caribbean nations.

Ministers and diplomats from nations such as Antigua, Sri Lanka and Nepal are expected to attend the parade.

Mr Parikh, an IT manager in the New York Police Department and trustee of the NYPD Indian Police Officers organisation, said the city's police department will also participate in the parade.

Every year, thousands of people from the Indian diaspora converge in the heart of Manhattan in their traditional finery to celebrate India's Independence Day.

The day-long celebrations also include special food stalls, cultural extravaganza and floats by various Indian organisations based in the US.

Popular celebrities and artists from India are invited every year as chief guests and grand marshals for the parade.