"Don't Know Why We Are Losing": Moon Moon Sen On BJP Gains In Bengal

Moon Moon Sen was dubbed the "giant killer" after she defeated a nine-time Left lawmaker from Bengal's Bankura in 2014, soon after she joined politics. 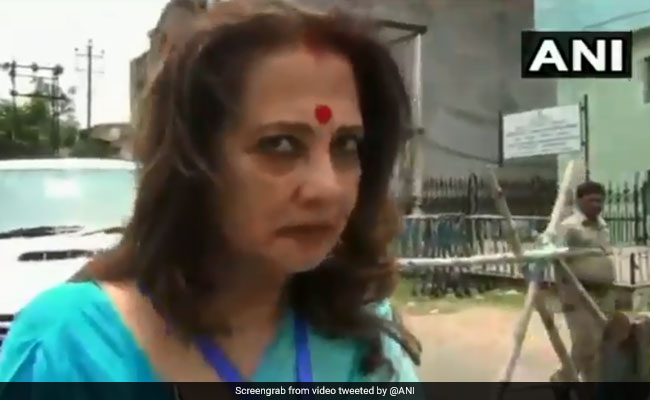 Actor-politician Moon Moon Sen, who is trailing Babul Supriyo by over 65,000 votes in Bengal's Asansol, said her party Trinamool Congress should get 35-40 seats in Bengal even as BJP leads in 18 seats in the Mamata Banerjee-ruled state.

She also said she did not know why were they (Trinamool Congress) losing.

"I don't know why we are losing. You (journalist) tell me why are we losing?" Ms Sen asked.

Soon after the comment, she refused to speak any further.

In another video, shared by news agency ANI on Twitter, the Trinamool candidate, with a sullen face, tells reporters in Hindi that she is very unhappy as the counting is not going well.

Moon Moon Sen was dubbed the "giant killer" after she defeated a nine-time Left lawmaker from Bengal's Bankura in 2014, soon after she joined politics.

Her opponent Babul Supriyo too defeated a formidable Trinamool opponent from Asansol in 2014. It was his first election too.

Ms Sen's gaffes have made headlines in this election season, once when she called the statue vandalism of 19th century Bengal icon "tiny bit of violence" and had earlier delivered one of the most memorable lines in this national election. The most memorable line came after Bengal clashes on April 29 when she told NDTV that she "hadn't heard anything" because she had woken up late.

"They gave me my bed tea very late so I woke up very late. What can I say? I really don't know," the actor-politician remarked, becoming social media fodder for the next few days.

The final results are expected by late evening today.