Soon after Rahul Gandhi arrived at the public meeting at the end of the day's march, the showers started but Rahul Gandhi chose to continue his speech. 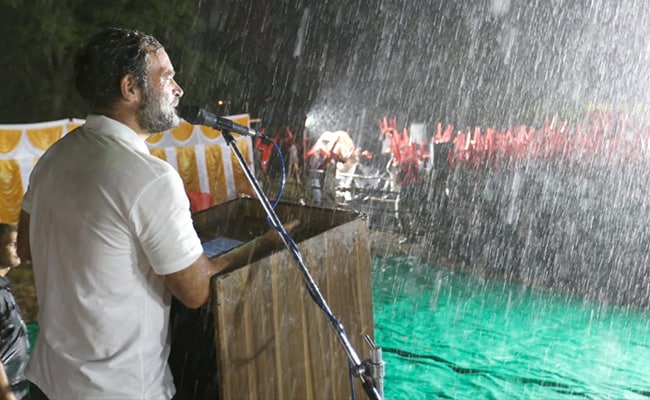 The former Congress president also attacked the BJP government in Karnataka over corruption.

Congress leader Rahul Gandhi on Sunday said nothing can deter the Bharat Jodo Yatra which is aimed at "stopping hatred and violence spread by the BJP-RSS", as he addressed a public meeting in heavy rains here.

Soon after Rahul Gandhi arrived at the public meeting at the end of the day's march, the showers started but Rahul Gandhi chose to continue his speech.

"This yatra will carry on from Kanyakumari to Kashmir and will not stop. As you are seeing it is raining, but rains have not stopped this yatra.

"Heat, storm or cold can't stop this yatra. This river-like yatra will carry on from Knayakumari to Kashmir and in this river you will not see things like hate or violence. There will only be love and brotherhood as this is India's history and DNA," he said.

Rahul Gandhi said that whatever "hatred and violence the BJP may spread, this yatra will stop it and will help unite people".

The former Congress president also attacked the BJP government in Karnataka over corruption.

Meanwhile, a number of party leaders, including general secretaries Jairam Ramesh and Randeep Surjewala tweeted Rahul Gandhi's speech, saying he was undeterred by the rain and showed his strong resolve to fight for the country.

"On the evening of Gandhi Jayanthi undeterred by a downpour in Mysuru, @RahulGandhi electrified a sea of people.

"It was an unequivocal declaration. No force can stop the #BharatJodoYatra from uniting India against hate, from speaking up against unemployment and price rise," Jairam Ramesh said on Twitter while sharing the video