Tamil Nadu BJP treasurer SR Sekhar and a number of other party workers filed a complaint with the Cyber Crime Cell in Coimbatore and sought immediate action against Divya Spandana. 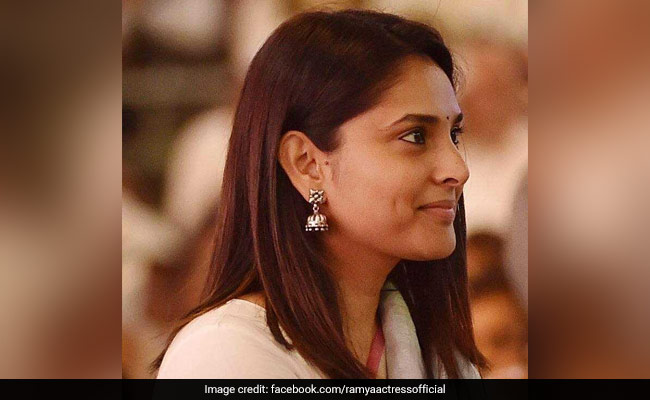 Days after Congress digital communications chief Divya Spandana was charged with sedition, leaders of the BJP's Tamil Nadu unit have filed a police complaint against the 36-year-old actor-turned politician for posting an "insulting" tweet against Prime Minister Narendra Modi.

Tamil Nadu BJP treasurer SR Sekhar and a number of other party workers filed a complaint with the Cyber Crime Cell in Coimbatore and sought immediate action against Divya Spandana.

Talking to reporters, Mr Sekhar alleged that Ms Spandana in her tweet had made derogatory remarks against PM Modi while referring to the Rafale deal.

On Thursday, Ms Spandana undeterred by the sedition case, took on the Prime Minister again over the controversial Rafale fighter jet deal, using a still from the recently released trailer of the Amitabh Bachchan-starrer "Thugs of Hindostan".

The trailer shows Aamir Khan, seen in a role seemingly inspired by Captain Jack Sparrow from the Pirates of the Caribbean franchise, use the punchline "Dhokha swabhaav hai mera (Betrayal is in my nature)". Ms Spandana posted this still from the trailer with the caption "PM Modi to Hindustan Aeronautics Limited."

Hindustan Aeronautics Limited or HAL, the state-run aircraft maker, is the company that the Congress alleges was overlooked for the Rafale fighter jet contract with France's Dassault Aviation. The Congress alleges, in a claim bolstered by the revelation from former French President Francois Hollande, that HAL was kicked out of the agreement to favour industrialist Anil Ambani's Reliance Defence in an apparent case of crony capitalism. The governments of India and France and Reliance have vehemently denied this claim. The BJP has fiercely attacked the Congress for making the allegations as well.

In Lucknow, Rizvan Ahmed, who identifies himself as a lawyer and social activist, filed a sedition case against the former Karnataka MP for referring to PM Modi as a "thief".

Ms Spandana had posted a photoshopped image of PM Modi with the word 'chor' (thief) on the forehead of his wax statue, with the hashtag #ChorPMChupHai.