Vice President Venkaiah Naidu urged the members to put an end to unpleasant situations in the House in order to sustain the credibility of Parliamentary institutions in public esteem. 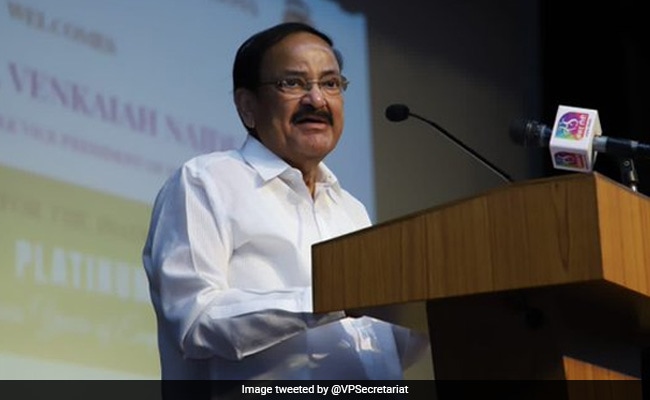 Venkaiah Naidu told the MPs that their conduct is under constant public scrutiny. (File)

Amid continued disruptions in Parliament, Vice President M Venkaiah Naidu on Saturday said adversarial politics should not be allowed to impact the functioning of Parliament and state legislatures.

Inaugurating a two-day orientation programme for new MPs virtually from Hyderabad, he said differences should be resolved through debates and discussions by cultivating the ability to understand others' opinions point but not necessarily agree with them.

Expressing concern over the overshadowing of debates and discussions by rising disruption and confrontation, Mr Naidu said people, especially the youth, are justifiably getting impatient and disillusioned with the way democratic institutions are functioning.

"Both government and the Opposition have the collective responsibility for a smooth and effective functioning of the House," he said.

Mr Naidu urged the members to put an end to unpleasant situations in the House in order to sustain the credibility of Parliamentary institutions in public esteem. Discipline, dignity and decorum in the House are sine qua non, he stressed.

Urging the members to make significant and meaningful contributions to enrich the proceedings of the House, Naidu said while informed critique of the government is always welcomed, protracted disruption as a Parliamentary strategy should be avoided.

"Let the government propose, let the Opposition oppose and let the House dispose," is the only way forward in a democracy. The members should resort to the three-D mantra: discuss, debate and decide, and avoid the other 'D' - disruption, he said.

Reminding the members that their performances and conduct are under constant public scrutiny and evaluation, Naidu counselled them to retain public trust and confidence, which he said can be ensured through orderly proceedings.

Highlighting Prime Minister Narendra Modi's motto of 'Perform, Reform and Transform', he stated that his concerted efforts to effectively enhance the functioning of the House have resulted in almost doubling of the productivity in the last eight sessions.

He requested the new members to make a conscious choice either to carry forward this positive trend and become change agents or become obstructionists.