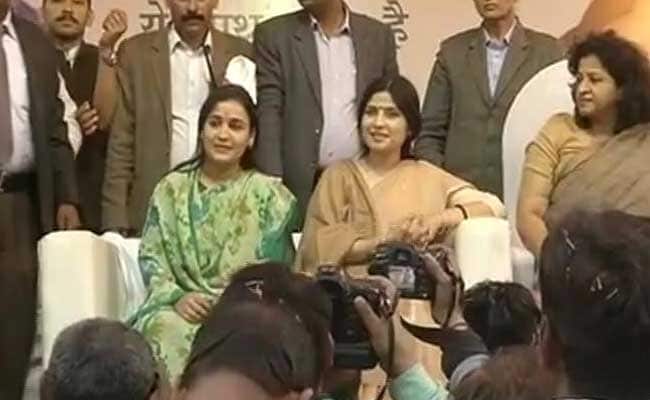 Aparna Yadav is contesting from the Lucknow Cantt seat against Rita Bahuguna Joshi.

Lucknow: Samajwadi Party patriarch Mulayam Singh, who has so far campaigned only for his brother Shivpal Yadav, joined forces today with daughter-in-law Dimple Yadav to seek votes for Aparna Yadav - the wife of his younger son  Prateek Yadav of the 5-crore Lamborghini fame. The Yadav senior, who was politely sidestepped by his son Akhilesh Yadav -- Dimple Yadav's husband -- in the struggle to control the party, had said he would not campaign in this election after the alliance with the Congress was announced.

"We appeal to you to make Aparna win with a massive majority... our respect is attached to it," Mulayam told a rally attended by a number of Congress members.

The younger Yadav bahu - who holds a post-graduate degree in politics from the University of Manchester - has admitted to having political ambitions. In this election, she is the candidate from the Lucknow Cantt seat, vying for votes with former Congress veteran Rita Bahuguna Joshi, who changed camp to join the BJP. The battle is going to the one of the most-watched in the state, with Ms Bahuguna Joshi being the daughter of former Chief Minister HN Bahuguna Joshi.

"A lot of people are changing their sides... those who have not been loyal to their side - how will they be loyal to you... will they be yours?" Aparna Yadav said in a broadside to Ms Bahuguna Joshi, who is the sitting legislator from the constituency.

In the Yadav versus Yadav power struggle, Aparna Yadav had been staunchly on the side of Shivpal Yadav - who was sidelined after the Election Commission recognized the Chief Minister as the true leader of the party.

But speaking after Mulayam Singh Dimple Yadav - who had always maintained a distance from the family feud -- sought to present a united front.
Comments
Mulayam SinghDimple YadavAparna YadavLucknowRita Bahuguna Yadav