Election Results 2020: When, Where and How to Watch Counting of Votes for Delhi Assembly Election

Delhi Election Results 2020: An aggregate of five exit polls showed AAP winning 56 of the 70 assembly seats in the national capital, leaving 14 for the BJP and zero for the Congress. 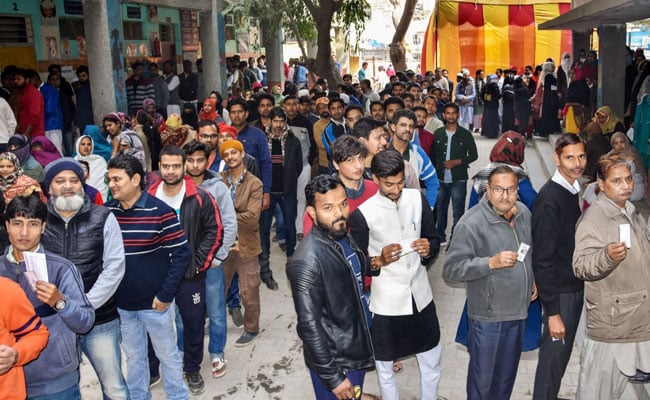 Delhi witnessed a voter turnout of 62.59 per cent during the assembly elections 2020.

Votes polled for the closely watched Delhi assembly election 2020 will be counted on Tuesday, and the results declared later that evening. You can watch Delhi election results live on NDTV 24x7 or ndtv.com/live to track the fastest and the most accurate developments. Special coverage of the Delhi assembly elections 2020 will start at 7 am on Tuesday on NDTV. You can visit ndtv.com for the latest constituency-wise results, track prominent contestants and follow live updates from the newsroom. The ndtv.com website will feature cutting-edge graphics and detailed insight into the results. From present vote share to past results readers will be able to find the complete lowdown on ndtv.com.

The Delhi assembly election 2020 was held on Saturday, with 62.59 per cent of the city's voters coming out to exercise their democratic right. The voter turnout in the previous assembly election in 2015 stood at 67.5 per cent.

The election was seen as a direct contest between the ruling Aam Aadmi Party (AAP) and the BJP, which is in power at the centre. Exit polls released after the conclusion of voting seemed to suggest a clear victory for AAP, with the BJP coming a distant second.

An aggregate of five exit polls showed the Arvind Kejriwal-led AAP winning as many as 56 of the 70 assembly seats in the national capital, leaving 14 for the BJP and zero for the Congress. The BJP has trashed the findings, with party leader Manoj Tiwari asking the people to save a tweet claiming that it will walk home with 48 constituencies.

Around 21 centres have been set up for counting the votes on Saturday. A controversy had erupted over the Election Commission's delay in releasing the final voter turnout numbers, with Arvind Kejriwal -- Delhi Chief Minister and AAP convenor -- terming it as "shocking". AAP has also alleged efforts at tampering with the Electronic Voting Machines, tweeting out videos to back their claim.

The run-up to the Delhi assembly elections 2020 was marked by a stormy campaign that saw the BJP launching an all-out attack on the Aam Aadmi Party government, with leaders such as party MP Parvesh Verma, Union Minister Anurag Thakur, Home Minister Amit Shah and Uttar Pradesh Chief Minister Yogi Adityanath accusing the Arvind Kejriwal government of backing protests against the Citizenship Amendment Act in the city.

Intent on keeping its campaign "positive", the Aam Aadmi Party showcased the pro-people initiatives taken up in the national capital such as the slashing of electricity rates, installation of CCTV cameras and free bus rides for women. The ruling party expects a repeat of the 2015 elections, when it bagged 67 of the 70 assembly seats in the national capital, leaving just three for the BJP and none for the Congress.

The Congress, which hopes to emerge as the dark horse in the race, is hinging its prospects on development works carried out under late Chief Minister Sheila Dikshit from December 1998 to December 2013.