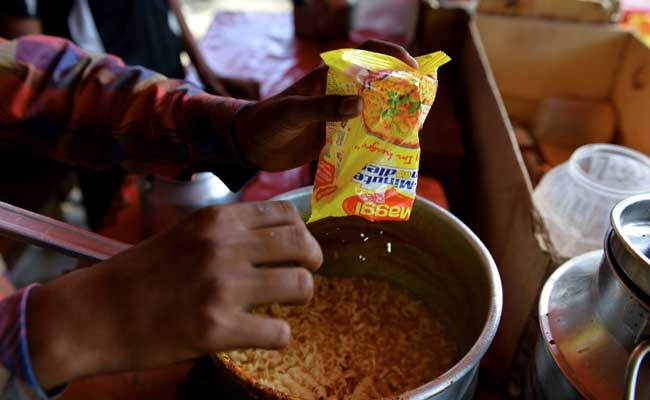 Maggi is facing a country-wide scrutiny over high content of lead and mono-sodium glutamate or MSG, a taste enhancer. (Agence France-Presse photo)

New Delhi: The state government of Delhi on Wednesday banned Maggi, a brand of instant noodles made by Nestle's Indian unit, citing high levels of lead found in preliminary testing.

The controversy over the noodles began May 20, when food safety regulators in the neighboring and larger state of Uttar Pradesh revealed that samples of Maggi noodles had levels of lead nearly seven times the permissible limits. Authorities there have begun a criminal case into the matter, although Nestle India responded that it did not agree with the order and that the samples were taken from a batch of noodles past their "use by" date.

Nestle India said in a statement issued Monday that it had tested nearly 1,600 samples of Maggi at internal and external laboratories and found the levels of lead "well within the limits specified by food regulations," declaring Maggi safe to eat. Representatives in the company's Gurgaon office were not available for comment Wednesday.

The health minister of Delhi, Satyendra Jain, said at a news conference Wednesday that his government would also file a criminal case against Nestle India under the Prevention of Food Adulteration Act. The ban, he added, will be in place for 15 days, after which the authorities will test fresh stocks of the product.

Bans on offending products are not entirely new in India. When the Delhi-based Center for Science and the Environment published a report alleging high levels of pesticides in PepsiCo and Coca-Cola drinks in 2006, various state governments issued bans on the products.

An official with the Consumer Affairs Ministry told the Press Trust of India that all states were testing samples of the product. Tests on the product in Goa, Kerala and Maharashtra have not found high levels of lead, according to local reports.

"If impurities are found and they are injurious to health, then we will take action against the company," Ram Vilas Paswan, the minister for consumer affairs, food and public distribution, told reporters in comments broadcast Wednesday.

A Bihar court has ordered that a police complaint be filed against Nestle India executives - and three Bollywood stars featured in advertisements of the product - after a Maggi noodle consumer became ill.

Madhuri Dixit, one of the stars, came to Nestle India's defense on Twitter last week, saying that a company team had assured her that it adhered to stringent testing. Another, Amitabh Bachchan, said that he had not endorsed the product for two years, and Preity Zinta, the third star, said on Twitter that she had done a Maggi commercial 12 years ago.

The countrywide response reflects the product's popularity in India. Beyond its famous endorsers and prevalence on store shelves, the Indian government organized the delivery of 200,000 packets of the noodles to neighboring Nepal immediately after the earthquake there.

The noodles - which were also found in Uttar Pradesh testing to have high levels of added monosodium glutamate, commonly known as MSG - are not the only Nestle product to come under scrutiny recently. On Tuesday, a food safety official in Tamil Nadu confirmed that a milk supplement package made by Nestle India contained more than two dozen live insects and worms.

That safety department had already tested samples of Maggi and will conduct testing of the milk supplement as well, said the official, R. Kathiravan. He said it was unclear whether the supplement was contaminated during packaging or after it had been opened.

"If the sample is unsafe, we are going to prosecute them legally," he said.

A statement from Nestle India on Tuesday proclaimed the product safe, saying: "Our manufacturing technology excludes the possibility of insects living and surviving in the sealed package in which this product is sold."
© 2015, The New York Times News Service