On May 9, Rahul Gandhi put up two contrasting pictures - people standing in a long queue with oxygen cylinders next to them and a dug-up India Gate due to ongoing construction work for the Central Vista - and captioned it "People need Oxygen not PM's residence". 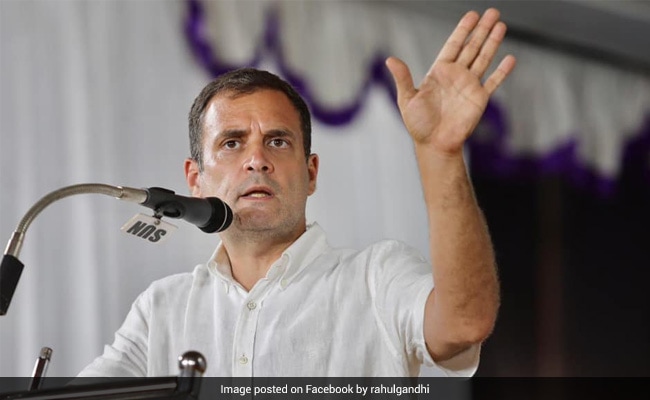 Congress MP Rahul Gandhi, with his tweet-a-day attack on the centre, today spotlighted dead bodies found floating in rivers, the serpentine queues exhausting patients' reserve and targeted Prime Minister Narendra Modi for pressing ahead with the Central Vista Avenue redevelopment project right in the middle of a raging pandemic.

The redevelopment of the Central Vista, the nation's power corridor, envisages a new Parliament building, a common central secretariat, revamping of the 3-km Rajpath from Rashtrapati Bhavan to India Gate, new Prime Minister's residence and office, and a new Vice President Enclave.

"Countless dead bodies flowing in rivers; lines in hospitals up to miles; the right to life security is taken away! PM, take off those pink goggles that lets you see nothing except for Central Vista," Mr Gandhi said in a tweet in Hindi.

Yesterday, dozens of bloating, decomposed bodies washed up on the banks of Ganga at Bihar's Buxar in terrifying visuals that spooked the villagers. The authorities believe the bodies floated down from Uttar Pradesh and belong to Covid patients whose relatives may have been unable to find space to cremate or bury them.

On Saturday, several partially burnt bodies were seen floating in the Yamuna at Hamirpur town. The Congress had alleged these bodies are proof of the untold hidden Covid deaths.

The Delhi High Court today is set to hear an application seeking a stay on all construction work at the Central Vista.

According to the disaster management authority, all construction activities have been stopped except where labourers are residing on-site but the workers for the Central Vista project are being ferried in buses from various locations in Delhi.

At a meeting of the party's highest decision-making body on Monday, Congress chief Sonia Gandhi targeted the government for pursuing the grand project instead of providing free vaccination to all.

"Every expert has said that it would have made more sense and it would have been financially more equitable for the Centre to bear the costs. But we know (Prime Minister Narendra) Modi government has other priorities, pursuing grandiose projects against the force of public opinion and the face of widespread criticism," said the Congress chief.

On May 9, Rahul Gandhi put up two contrasting pictures - people standing in a long queue with oxygen cylinders next to them and a dug-up India Gate due to ongoing construction work for the Central Vista - and captioned it "People need Oxygen not PM's residence".

In a tweet on May 7, the Congress leader termed the ongoing work at Central Vista a "criminal wastage". He exhorted the Prime Minister to "put people's lives at the centre- not your blind arrogance to get a new house!"

Union minister Hardeep Singh Puri last week, defending the government, hit back at the Congress, saying the party's discourse is "bizarre" as its leaders themselves had supported the idea when the UPA was in power.

"Congress's discourse on Central Vista is bizarre. Cost of Central Vista is about Rs 20,000 crore, over several years. GoI has allocated nearly twice that amount for vaccination! India's healthcare budget for just this year was over Rs 3 lakh crore. We know our priorities," Mr Puri had tweeted.