Foreign Minister Sushma Swaraj had urged the Organisation of Islamic Cooperation (OIC) to "act together" to combat global terrorism amid heightened tensions between India and Pakistan triggered by the Pulwama terror attack. 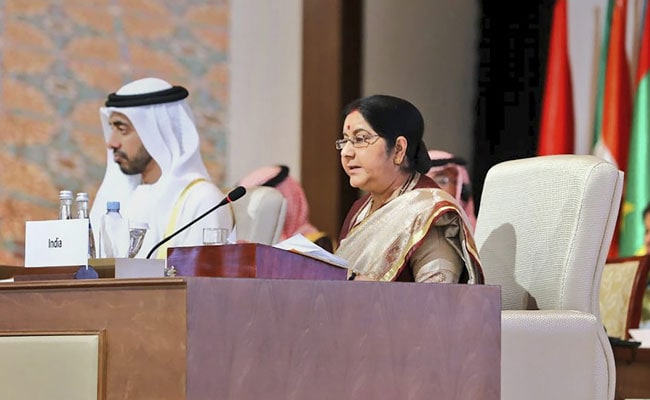 Sushma Swaraj had urged the OIC to "act together" to combat global terrorism.

Jammu and Kashmir is an integral part of India and is a matter strictly internal to India, New Delhi said on Saturday after the Organisation of Islamic Cooperation (OIC) criticised India on Kashmir in a resolution adopted by the influential grouping of 57 countries. The resolution came just a day after Foreign Minister Sushma Swaraj, as the guest of honour, called out "states which shelter terrorists".

In its first reaction to the resolution, India's Ministry of External Affairs said, "Our stand is consistent and well known. We reaffirm that Jammu and Kashmir is an integral part of India and is a matter strictly internal to India."

In a sharply-worded statement on Saturday, the OIC hit out at what it called "intensified Indian barbarities since July 2016" and "illegal detentions and disappearances" in Jammu and Kashmir.

On Friday, Ms Swaraj had urged the OIC to "act together" to combat global terrorism amid heightened tensions between India and Pakistan triggered by the Pulwama terror attack last month. Though she did not name Pakistan in her 17-minute address, she said, "If we want to save humanity, we must tell the states who provide shelter and funding to terrorists, to dismantle the infrastructure of the terrorist camps and stop providing funding shelter and funding to the terror organisations based in that country."

She also said terrorism, which was destabilising regions and putting the world at great peril, was not against any religion. "Terrorism and extremism bear different names and labels. It uses diverse causes. But in each case, it is driven by distortion of religion, and a misguided belief in its power to succeed. The fight against terrorism is not a confrontation against any religion," Ms Swaraj said.

On Saturday, the OIC adopted a resolution on Kashmir, attacking India for "indiscriminate use of force against innocent Kashmiris" and also praised Pakistan Prime Minister Imran Khan for sending back Indian Air Force pilot Abhinandan Varthaman, who was captured after an aerial encounter on Wednesday.

In response, Pakistan's Foreign Office said that the OIC meeting of foreign ministers had concluded with a resolution that "supported" Pakistan on the Kashmir issue.

Pakistan's Foreign Minister Shah Mehmood Qureshi had skipped the meeting of foreign ministers because the OIC had invited Ms Swaraj to the event, sending junior officials to "represent the country's interests".

It was for the first time that India has been invited to an OIC meeting as guest of honour. Pakistan, a member of the OIC, tried to get Ms Swaraj ''disinvited'' from the Abu Dhabi meet following India's air strike on a terror camp in Pakistan but its request was turned down.