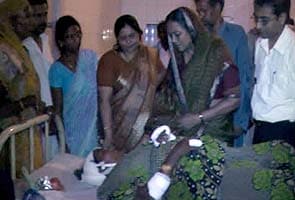 Rohtas: A Dalit man was stoned to death and at least 40 others, including old women and children, seriously injured on the Independence Day for defying a diktat and unfurling the national flag at the site of a temple in Baddi village in Bihar's Rohtas district, 160 km from Patna.

The upper-caste men attacked the Dalits after they allegedly defied a diktat not to unfurl the flag in front of a temple of Guru Ravidas, a lower-caste saint prominent with Dalits across the country.

The statue stands on land where the upper castes of the village wanted to erect a statue of Nishant Singh, considered to be a freedom fighter from the area.

A Communist Party of India-Marxist Leninist or CPI-ML leader, Arun Singh, who led a fact-finding team to the village, said that the attackers vandalised the statue and torched the temple and a hut next to it. Mr Singh alleged the entire incident was preplanned and the district administration did nothing, despite knowing about it.

The injured have been admitted to the Patna Medical College Hospital. The one person killed died on the way to the hospital.

Promoted
Listen to the latest songs, only on JioSaavn.com
Lok Sabha speaker Meira Kumar, who visited the injured at a hospital in Sasaram, the district headquarters of Rohtas, called the attack "unacceptable" and asked for strong legal action against the guilty. Ms Kumar, who represents Sasaram in Parliament, also asked the society to introspect on caste violence.

The incident, ironically, happened on a day Bihar Chief Minister Nitish Kumar visited a Dalit village close to Patna to unfurl the national flag there. Mr Kumar's Janata Dal United or JD-U, as part of its social engineering in Bihar, coined the term 'Mahadalits' for the poorest and the most marginalized among the Dalits.