Activists are up against Ayurveda text book that details methods of sex selection, which is banned. It is another matter that the methods are questionable and dangerous. 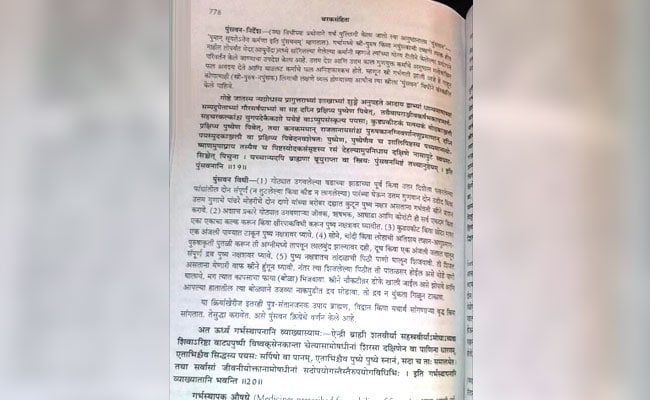 Content for the book is adapted from Charaka Samhita, a very old Ayurveda treatise.

Mumbai: While mystery persists over the process to "purify womb" and get a "super baby" - over which a tussle is on between activists and the Rashtriya Swayamsevak Sangh in Kolkata -- an Ayurveda textbook has revealed an intriguing process to conceive a boy.

A third year Bachelor of Ayurvedic, Medicine and Surgery textbook says: "Collect two north- or east-facing branches of a Banyan tree. Take precisely two grains of fennel seeds, mix the ingredients with curd and the mixture must be consumed by a pregnant woman during the period of Pushya Nakshatra".

The book does not say how this process stacks up against the banned modern methods of sex selection. But its success rate appears questionable, given that it lists five other processes to conceive male children.

One of them involves feeding copious quantities of gold, silver and iron to the would-be mother. The book does not say if the woman would survive the treatment.

The process goes thus: "A small idol representing a man must be made out of gold, silver or iron. This must then be melted in the fire, once it turns red, mix with curd and either milk or water and consume the mixture during the same period."

The content for the textbook has been adapted from Charaka Samhita, a treatise on Ayurveda written prior to 2nd Century CE.

While in Kolkata, activists have called garbh sanskar (womb purification) "unscientific and regressive" and filed an appeal in court to stop it, Mumbai activists are concerned that the text book violates the government's ban on sex selection for unborn children.

"I don't think what they teach will make much of a difference in impacting the sex ratio," said Activist Varsha Deshpande. But what the book teaches, she said, is "against the Constitution".

"The Constitution has promised us equality, but this goes against that. Popularizing such beliefs is definitely dangerous in the long run," the activist added.

Activist Ganesh Borade has written a letter to officials, complaining that the textbook violates the Maharashtra PCPNDT (Pre-Conception and Pre-Natal Diagnostic Techniques) Act and propagates gender bias.  "I demanded the content be removed from the textbook but this is still being taught as part of the curriculum," Mr Borade said.

Promoted
Listen to the latest songs, only on JioSaavn.com
On Sunday, Arogya Bharati's garbh sanskar workshop for "susantan" or super babies had got off to a chaotic start in Kolkata, with RSS workers refusing entry to activists, including the head of West Bengal's Commission for Protection of Child Rights. Sixty couples had signed up for the workshop - some of them for a second time.

State child rights panel chief Ananya Chakraborty, who filed a complaint with the police, said, "The matter was so hush hush. Why? This hocus pocus and nonsense cannot be allowed to continue".