Bengaluru's Bannerghatta Biological Park has come out with a programme during the lockdown period for those who want to conserve wildlife and adopt animals at the zoo. 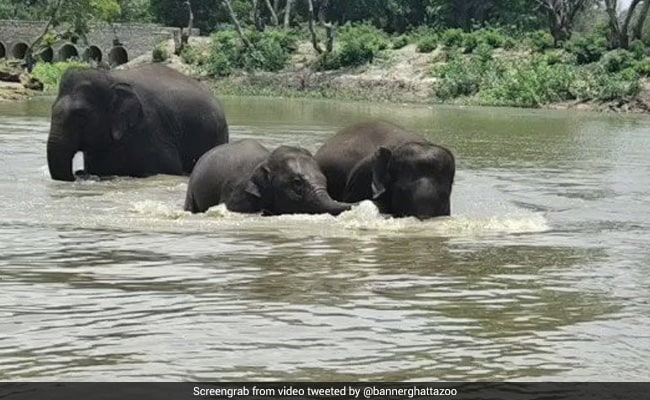 Bannerghatta Biological Park has released a list of animals that can be adopted.

Wish to adopt an Indian cobra for as low as Rs 2,000 per annum or Asiatic elephant for Rs 1.75 lakh?

Bengaluru's Bannerghatta Biological Park (BBP) has come out with a programme during the lockdown period for those looking for an opportunity to conserve wildlife and adopt animals at the zoo.

Certain privileges such as gift voucher for zoo visit and display of name in adoption board would be extended for adopting an animal, depending upon the adoption amount.

"The animal adoption programme is an opportunity for you to get involved in supporting feed and veterinary care expenses for zoo animals with provision for Income Tax rebate under 80G. There are 21 elephants which can be adopted online!" say zoo officials.

The BBP has released a list of animals that can be adopted.

"The purpose of the adoption programme is to create awareness and connect with people involved in conservation activities, not just generating revenues," the Executive Director of the government-run BBP, Vanashree Vipin Singh told news agency PTI on Friday.

"We don't run this programme with profit motive."

The zoo, which sees an annual footfall of around 15 lakh, has been closed since the middle of March following lockdown declared in the wake of the COVID-19 pandemic. It received a record 23,000 people on a single day on January 1 this year.

The animal adoption initiative is part of the BBPs outreach programme as people are not able to visit the zoo due to the lockdown.

In other times, interested people sign up to adopt animals during their visits to the zoo, she said.

Vanashree said post the lockdown, the zoo would not be opened immediately.

BBP would study the situation, put in place social distancing, disinfectants and hygiene protocols in place, among others, before taking a call to throw open the zoo for public. It would come out with a dos and dont's list, and a revised strategy in terms of admission capacity and related things.

An online survey would be held to understand issues around fears of the public in visiting the zoo and their expectations from the BBP, among others, Vanashree said.

"Online ticketing will only be there" after the zoo reopens, she said but hastened to add that BBP would also have emergency kiosk to accommodate people who dropped in without booking, depending on the capacity available as it does not want to send people back or make them wait for long hours.