Penal action should be taken against those spreading "unfounded and misleading rumours" about the safety and efficacy of COVID-19 vaccines being used in the country, the centre has said in a letter to the chief secretaries of all states and union territories.

Referring to "rumour-mongering, particularly by vested interests", the centre said both Covid vaccines in use in India had been found to be "safe and immunogenic" and spreading rumours could cause "unwarranted doubts among people at large".

"There is, therefore, a need to check all such kinds unfounded scare-mongering relating to the safety and immunogenicity of the vaccines," the centre said.

The letter, written last week by the Union Home Secretary, reminded states of existing provisions under the Disaster Management Act and the Indian Penal Code, and urged them to "counter the spread of all such kind of false information... as well as promptly disseminate factual messages".

The national coronavirus vaccination drive began January 16 after the centre gave emergency use approval to two vaccines - Bharat Biotech's Covaxin and Covishield, which was developed by AstraZeneca and Oxford University, and is being manufactured by Pune-based Serum Institute.

Both vaccines were declared "110 per cent safe" by VG Somani, the DCGI (Drug Controller General of India), who approved them after the companies presented trial data to a panel of experts. 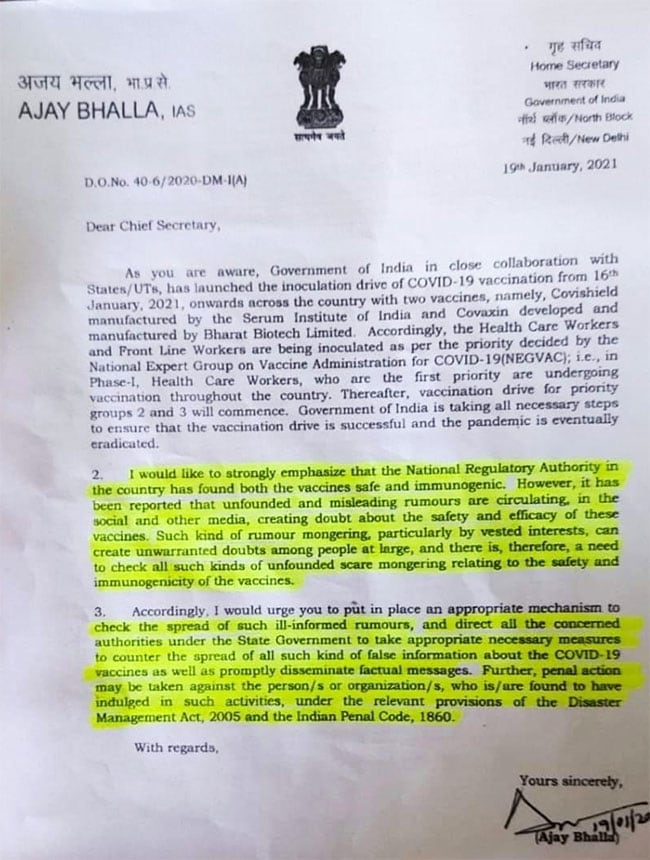 The decision to approve Covaxin, though, triggered a row, with critics pointing to a lack of data from the third and final phase of trials; typically this phase tests how a vaccine's efficacy.

The centre said its decision was based on "a tremendous amount of immunogenicity and safety data" from the first two phases and that vaccine had been allowed in "clinical trial mode"; this meant all those getting Covaxin in the vaccination drive had to sign consent forms.

Prime Minister Narendra Modi, Health Minister Dr Harsh Vardhan and senior doctors from across the country have stressed that both vaccines are safe and effective.

However, many voiced, and continue to voice concerns about Covaxin, including doctors in both Delhi and Karnataka, who have asked that they be administered Covishield because it was a matter of "great concern" that a vaccine with unknown Phase III trial results had been approved.

Amid intense scrutiny over Covaxin and questions over its Phase III trial data, Bharat Biotech Chairman Dr Krisha Ella hit out at critics, saying his company had an excellent track record.

India's vaccination drive is currently in the first phase, in which around one crore healthcare staff and two crore frontline workers will receive the shots.

They will be followed by around 27 crore people - consisting of those over the age of 50 and those below with serious illnesses and associated comorbidities. Prime Minister Modi will get the vaccine at this time, as will all chief ministers, MPs and MLAs who fall in this category.

On Sunday the Health Ministry said nearly 16 lakh people have been vaccinated so far.