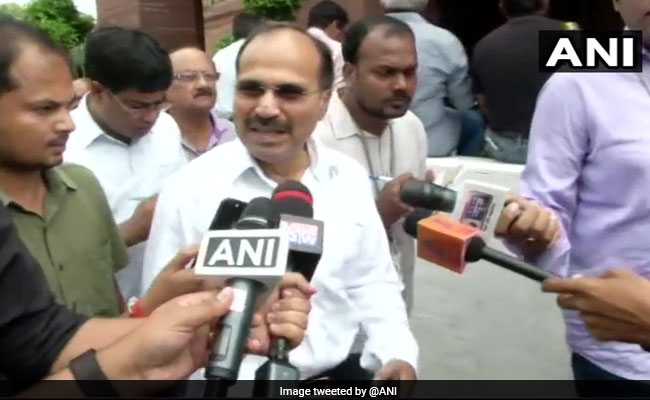 The BJP on Friday hailed the Union Budget as one for a "new India" which laid the foundation for an inclusive and progressive nation, while the Congress panned it as "old wine in new bottle".

In this year's Budget, Finance Minister Nirmala Sitharaman hiked tax on petrol and diesel, raised import duty on gold, levied additional surcharge on super rich and brought a tax on high value cash withdrawals as she sought to spur growth with reduction in corporate tax and sops to housing sector, startups and electric vehicles.

Bharatiya Janata Party (BJP) chief and Union Home Minister Amit Shah said the finance minister presented a budget for a "new India" which laid the foundation for an inclusive and progressive nation, the rise of which was powered by the hard work of 130 crore countrymen.

"The Budget gives wings to India's farmers, youngsters, women and poor to fulfil their dreams," he said in a series of tweets.

The Budget highlighted the exemplary work in key sectors relating to the economy, housing, infrastructure and social sectors over the last five years and on this basis, ignited a spirit of hope that India could become a USD 5 trillion economy in the coming years, Mr Shah said.

"The Budget presented by FM Nirmala Sitharaman is a futuristic one. It provides a coherent roadmap for sectors that will drive growth and innovation among our citizens. The emphasis on clean energy and cashless transactions are also steps in the right direction," he said in a tweet.

Criticising the Budget, Congress leader in Lok Sabha Adhir Ranjan Chowdhury said it was just a repetition of "old promises".

"They (the BJP) are talking about a new India, but it is simply old wine in a new bottle," he told reporters outside Parliament.

He claimed that no new initiatives were announced by the government.

The Modi government has tried to project India as an "El Dorado" (a place of fabulous wealth for all), but in reality the pain of the economy is being experienced, he said.

"There is no plan for employment generation, there is no distinct plan for giving any facilities to agriculture sector, labour sector. This is nothing but a litany of old promises," Mr Chowdhury said.

Congress chief spokesperson Randeep Surjewala also slammed the government over the budget proposals and asked if a "mundane jugglery of acronyms" can pass off for vision for a New India.

"An utterly lacklustre, nondescript, uninspiring and directionless Budget 2019. Zero on economic revival. Zero on rural growth. Zero on job creation. Zero on Urban rejuvenation. Can a mundane jugglery of ''acronyms'' pass off for vision for a ''New India''?" he said on Twitter.

"#Budget2019 so far -- Maximum Intent, Minimum Content! Maximum Catchphrases, Minimum Catch-points!", he tweeted when the Budget was being presented.

Another Congress spokesperson, Abhishek Manu Singhvi, wrote on the microblogging website: "Bailout plans for PSUs & moves like inheritance tax are Modi''s outing from the closet as the ultra left, vote seeking politician that he is. He got RWs (economic & political) to vote for him but his heart is only toward RW (right-wing) Polity not Economics."

Mr Shah said the budget set the stage for fulfilling the collective dreams of water for every citizen, ensuring power connectivity across India and boosting manufacturing, especially in the "sunrise" sectors.

The Budget would enable India to become a more vibrant startup hub, he said.

"The #BudgetForNewIndia clearly reflects PM Narendra Modi''s vision for India''s development, where the farmers prosper, poor lead a life of dignity, the middle class get the due for their hard work and Indian enterprise gets a boost. This is truly a budget of hope and empowerment," the BJP chief said in another tweet.

Reacting to the Budget, Union minister Mukhtar Abbas Naqvi tweeted: "This Budget is a ''Gazette of New India'' with a commitment to ''inclusive growth & good governance".

"Heartiest Congratulations to Prime Minister and Finance Minister. This Budget will substantially contribute towards an unprecedented development of India particularly the empowerment of women and self employment of our youth," former Union minister Sushma Swaraj said.