Congress-NCP, Shiv Sena Hold Series Of Meetings To Work Out Consensus In Maharashtra

A draft of the common minimum programme (CMP) will have to be approved by top leaders of the three parties before being finalised, a senior Congress leader told PTI. 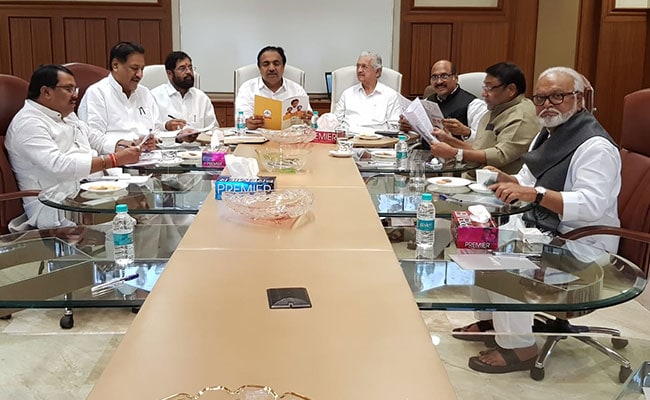 the meetings between Congress-NCP and Sena on Thursday were held in discreet manner.

Leaders of the Congress, NCP and Shiv Sena held meetings in Mumbai on Thursday to discuss a ''common minimum programme'' before a possible alliance with the Uddhav Thackeray-led party for government formation in Maharashtra.

A draft of the common minimum programme (CMP) will have to be approved by top leaders of the three parties before being finalised, a senior Congress leader told PTI.

"Leaders of the allies Congress-NCP and the Shiv Sena held several parleys to work out a consensus on a common agenda of governance which will be called the CMP," he said.

However, unlike the frenzy and buzz in political circles during the last few days, the meetings on Thursday were held in a discreet manner.

NCP MLA and former state deputy chief minister Ajit Pawar on Wednesday told mediapersons that a scheduled meeting between his party and the Congress was cancelled and that he was going to Baramati, triggering speculations about possible differences between the allies.

However, later NCP chief Sharad Pawar told reporters that his nephew Ajit Pawar made the remarks to avoid media.

An NCP spokesperson later said the meeting was on.

"The Congress and NCP leaders had to lie on Wednesday to keep the media at bay. Now secrecy is being maintained," a leader said on condition of anonymity.

"Rumours being floated that Shiv Sena president Uddhav Thackeray had meeting with Ahmed Patel and we have come to some sort of settlement. On behalf of Uddhav Thackeray let me clarify that this is untrue & being deliberately spread, our talks with Congress and NCP are in process," Mr Raut tweeted.

Earlier, senior Congress leader Prithviraj Chavan on Thursday morning said talks for government formation in the state were at a "preliminary" stage and no decision was taken so far.

The Congress and NCP on Wednesday deliberated at their respective party levels and later jointly to work out a CMP and power-sharing formula, the former state chief minister said.

"The Congress, NCP and Shiv Sena have so far held preliminary talks. A meeting will again be held today between the Congress and NCP, and later both the parties are expected to hold talks with the Shiv Sena. There is no decision as yet," Mr Chavan told PTI.

The BJP and Shiv Sena, which fought the October 21 state elections in alliance, secured a comfortable majority by winning 105 and 56 seats, respectively, in the 288-member Assembly.

But the BJP did not cede the Sena's demand of sharing the chief minister''s post, leading to falling apart of the nearly three-decade-old alliance.