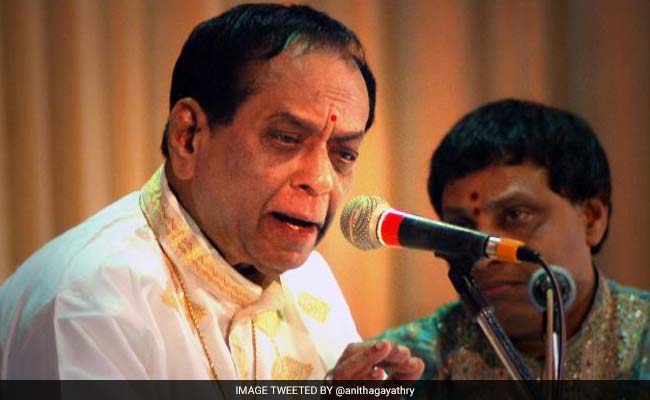 Balamuralikrishna died on November 22 after a brief illness at the age of 86.

Rajya Sabha member T Subbarami Reddy has demanded that 'Bharat Ratna' be conferred on Balamuralikrishna, the doyen of Carnatic music, who passed away recently.

In a letter to Prime Minister Narendra Modi, Mr Reddy said Balamuralikrishna was on par with recipents of the award including stalwart musicians like M S Subbulakshmi, Pandit Ravi Shankar, Ustad Bismillah Khan and Lata Mangeshkar.

"After 2008 when Pandit Bhimsen Gururaj Joshi was honoured with Bharat Ratna, no musician or singer has been honoured with this award.

"He (Balamuralikrishna) was a musician who appealed to both connoisseurs and laymen alike. He used classical music to give life to the lyrics in his songs," Mr Reddy wrote.

The Congress MP said honouring the Carnatic music legend with the highest civilian honour will make millions of music lovers in the country happy.

Balamuralikrishna died on November 22 after a brief illness at the age of 86.

Promoted
Listen to the latest songs, only on JioSaavn.com
Comments
BalamuralikrishnaBharat Ratna