The Congress legislators, led by Leader of Opposition Chandrakant Kavlekar, demanded that the governor should summon one-day session of the Assembly for a floor test. 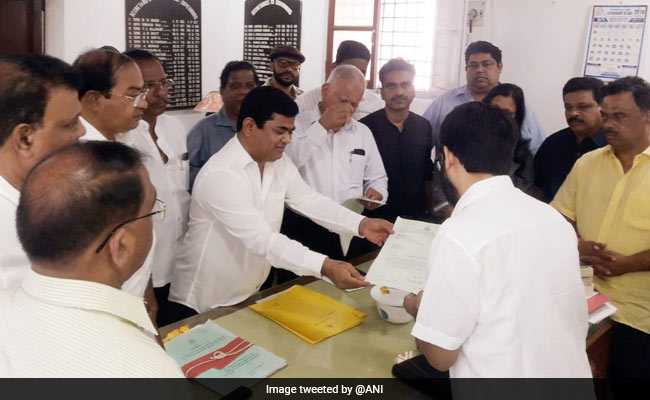 Congress legislators in Goa Tuesday met Governor Mridula Sinha and demanded floor test by the BJP-led government to prove its majority in the Assembly.

The move came at a time when 62-year-old Chief Minister Manohar Parrikar is admitted in the AIIMS in Delhi for a pancreatic ailment.

The Congress legislators, led by Leader of Opposition Chandrakant Kavlekar, demanded that the governor should summon one-day session of the Assembly for a floor test.

Mr Kavlekar said the governor assured them that she would get back on the issue in the next three-four days.

During the meeting with the governor, the Congress MLAs contended that the Parrikar-led coalition falls short of a majority in the 40-member Assembly and that the Congress has the required numbers to form the government.

"Let the state government prove on the floor that they have majority or else we can show that we have more legislators than them," Mr Kavlekar told reporters after meeting Governor Sinha.

The Congress has 16 seats in the Assembly. The state is being ruled by the BJP with the support of Goa Forward Party (GFP) and Maharashtrawadi Gomantak Party (MGP), NCP and Independents.

The BJP has 14 seats in the Assembly, GFP and MGP have three each and NCP has one. There are also three Independents.

The Congress legislators also urged the governor not to allow dissolution of the Assembly.

Mr Kavlekar said the BJP might force dissolution of the Assembly and another election in just one-and-a-half year.

The Assembly polls in the state were held in February last year.

"The BJP has a habit of recommending dissolution of the House when they dont have numbers with them. The governor should not allow such action in Goa as Congress is the single largest party in the House," Mr Kavlekar said.

"We dont want another election within one-and-a-half years," the Congress leader added.

"If the (BJP-led) coalition can't run the government, then we are ready to take over," he said.

Mr Kavlekar said a "race has begun within the government for chief ministership" as Mr Parrikar is hospitalised.

"Some of the BJP leaders are in touch with us as they are upset because their own party is talking about hiring the leaders from outside for CMs post," he claimed.

Mr Kavlekar said the Congress will announce its chief ministerial candidate when the governor summons one-day session of the Assembly to conduct a floor test.

"There is absolutely no dispute amongst us on who would be the Chief Minister. We will reveal the name when floor test is called," he said.

Congress Legislature Party had yesterday submitted a memorandum to the Governors office on Monday but could not meet Governor as she was out of station.