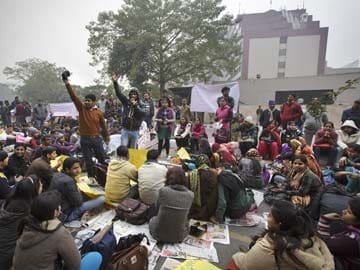 Members of All Guest Teachers Association, a contract teachers union, protest in front of the office of Arvind Kejriwal.

New Delhi: You could hardly blame Arvind Kejriwal, Delhi's new chief executive, for looking dour as he drove to work this week, barely 20 days after his anti-corruption Aam Aadmi, or Common Man, party upended Indian politics and took control of one of the world's most populous cities.

Kejriwal made the commute in his battered compact car, from his apartment in a middle-class housing block on the eastern edge of Delhi, eschewing, as he had promised during his campaign, the luxurious perks that usually come with elected office in this country: a chauffeured vehicle and a sprawling home in the city's leafy heart.

But when he arrived at his office at the Secretariat on Thursday, Kejriwal found a group of protesters from a teachers' union who had spent the night on the pavement outside his office. They were demanding a wage increase they said that they had been promised, and chanting: "The common man is here! Where is Kejriwal?" and, "As soon as you were elected, you became a VIP!"

Across town, one of Aam Aadmi's newly elected legislators had called a news conference to denounce Kejriwal as a "dictator" and a "liar" who had abandoned the party's principles. And Kejriwal's law minister has taken part in a televised, vigilante-style operation singling out a household of Africans he said were running a sex and drug ring, infuriating African diplomats, the Delhi police and the Foreign Ministry.

The city has emerged from its postelection swoon, in short, and criticism is coming from many directions.

On Saturday, when Kejriwal gave his first interviews since taking office, he was battered with combative questions. He responded combatively, dismissing the criticism as rhetoric from the country's two large parties, the Indian National Congress and the Bharatiya Janata Party, which suddenly view the newcomer as a threat.

"Our government did much more than we expected to in 21 days," he told an interviewer on the NDTV news channel. "Now, BJP and Congress may do whatever they want, but they cannot say we are corrupt. Now they are saying that we are anarchist and we do not know how to run the government."

The success of Aam Aadmi, founded only a year ago out of the embers of anti-corruption street protests, has been the surprise of the political season, and it has injected a new, exciting element into the coming showdown between the two timeworn heavyweights, Congress and the BJP.

Electrified by the public's reaction, Aam Aadmi's leaders swiftly decided to put up candidates for 400 parliamentary seats in the general election. New members are pouring in as fast as the party can register them, and at week's end, party leaders said membership had reached 1.5 million. Would-be candidates for Parliament camp outside the party's headquarters and the gate to Kejriwal's apartment complex, clutching forms listing their qualifications for office.

Kejriwal, a former tax commissioner who has never previously held elected office, is scrambling to keep up with the promises he made to his supporters in Delhi, only too aware that disappointing them could cause a euphoric moment to collapse.

But keeping promises, too, causes problems, he discovered this week, when he followed through on his pledge to ban foreign investment in supermarkets in the city, which helps mom-and-pop retailers but could hurt job creation.

Many in business and industry condemned the move, among them a prominent entrepreneur who had recently thrown in his lot with Aam Aadmi, and who went on television to warn the party's leadership against "the politics of cheap populism."

More rifts like this are bound to follow, said Shekhar Gupta, editor of The Indian Express, a popular daily newspaper.

"Right now, it seems to be unraveling, for the simple reason that they haven't been a political party for very long, so the structures and shock absorbers of a political party aren't there," Gupta said. "There is no central ideology that everyone agrees on. All kinds of people are joining in."

Some of Kejriwal's difficulties are understandable enough, as he rapidly shifts gears from leading street protests to governing a state of about 18 million people. Last Saturday, he began what was to be a weekly "janta darbar," or public hearing, setting up a desk outside the Secretariat and soliciting grievances from the general public.

But thousands of people poured into the space, clambering over barricades trying to reach Kejriwal, and the police, worried that he would be crushed, hustled him back inside. He later appeared on the roof, urging the crowd to go home. Four days later, he announced that he was scrapping the "janta darbar" idea, and would instead be soliciting feedback online.

Other missteps may prove harder to unwind, like Wednesday's raid on a household of African migrants. Several women from Uganda and Nigeria told reporters they were stopped by a crowd that included Aam Aadmi's law minister, Somnath Bharti, on their way home from a party and forced to undergo urine tests against their will.

In a stormy, televised confrontation, police officials refused Bharti's demand that officers enter the house, saying they did not have a search warrant or sufficient backup. The police later said the tests showed no evidence that the women had used narcotics.

But Kejriwal sided so staunchly with his minister that he has demanded the officers involved be suspended, threatening to begin a sit-in on Monday outside the office of the minister who oversees the city police.

None of these problems alarmed Amit Garg, 25, a law student who was stationed at the party's headquarters in central Delhi last week. The December elections were an ecstatic time for Garg, who slept on the floor rather than waste time going home, and now he was busy taking the names of people who were coming in to join the party.

"Before I worked for Arvind Kejriwal, I understood that nothing could be changed in India, but now I think that things can be changed," Garg said.

Sitting in a room illuminated by a single bare light bulb, he proudly ticked off Kejriwal's major acts since taking his oath of office as proof that "whatever we committed, we fulfilled."

Promoted
Listen to the latest songs, only on JioSaavn.com
"I am here because people can no longer tolerate corruption, and it's not easy to change things in India," he said. "He does not have a magic wand. He needs time."