The DMK chief said he will take out the rally despite the Chennai police denying permission to do so.

DMK chief MK Stalin is leading a massive rally against the Citizenship Amendment Act in Chennai despite the police denying permission to do so. Senior Congress leader and former Union Minister P Chidambaram has joined him and has hit the streets along with Mr Stalin.

Security has been heightened across Chennai for the rally. "The Citizenship Amendment Act  and the National Register of Citizens are against the constitution. They are against minorities, particularly Muslims. Lankan  Tamils wanting to stay in India ought to be given citizenship opportunity," DMK MP K Kanimozhi told NDTV.

On Sunday, taking note of a public interest litigation expressing apprehension over violence erupting during the rally, the Madras High Court directed the police to record it in order to fix liability in case of any damage to public or private property. "Our protest against the Citizenship Amendment Act will happen as planned," Mr Stalin told reporters. "The court refusing to stop this is a big victory for us."

Apart from Mr Stalin and Mr Chidambaram, other allies including MDMK chief Vaiko and Left parties marched from downtown Egmore towards the Rajarathinam Stadium, a distance of about two kilometres. While Mr Stalin, Mr Chidambaram and others held placards against the citizenship law, workers of the DMK and its allies raised logans against the contentious act and waved their party flags as they marched through the area.

The DMK chief had earlier appealed to all sections of society - irrespective of political allegiances - to participate in the rally as part of ongoing efforts to make the centre repeal the law. He also alleged that the "hasty and autocratic" law was aimed more at trampling the rights of Muslims than helping any community, as claimed by the ruling BJP. 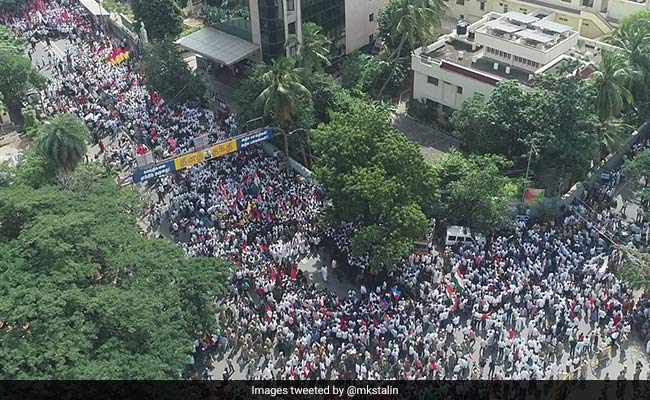 Mr Stalin has also slammed the ruling AIADMK, saying that the controversial law would not have cleared the Rajya Sabha if its members had not voted for it. "The Citizenship Amendment Bill got 125 votes in support and 105 against. If the AIADMK had voted against the legislation, it would have been defeated 116 to 114 in the Rajya Sabha and the central government would not have succeeded in throwing the country into chaos," he said.

Actor-politician Kamal Haasan has already filed a petition against the law in the Supreme Court.

Tamil Nadu Chief Minister EK Palaniswami, however, insisted that the Citizenship Amendment Act poses no danger to Muslims. "We are committed to protecting minorities. Don't believe rumours that the amended law will affect the citizenship of Indian Muslims. We will continue to press for dual citizenship for Lankan Tamils living in India," he said.