Lunar lander Vikram was scheduled to soft land near the south pole of the moon at around 1.55 am, making India only the fourth nation - after the United States, Russia and China - to successfully soft land on the moon's surface 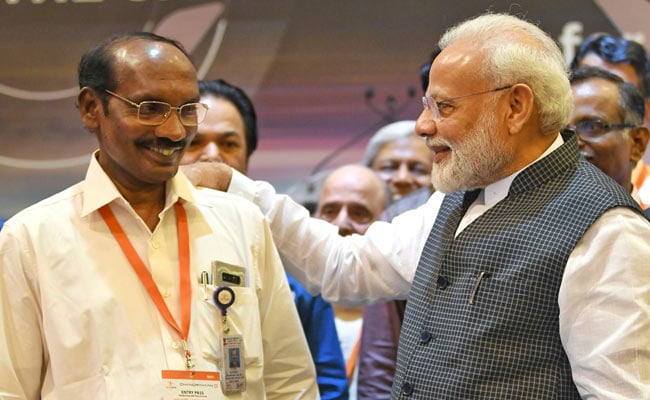 Prime Minister Narendra Modi met ISRO chief K Sivan on Saturday morning, hours after the space agency announced it had lost contact with the Chandrayaan 2 lunar lander Vikram during a historic attempt to soft land on the moon's surface. The Prime Minister, who had watched the entire sequence of events live from the control room in Bengaluru, reacted with compassion to console an emotional ISRO chief.

In a nearly minute-long video that has also been shared by news agency ANI, PM Modi can be seen shaking hands with the ISRO chief as he leaves the building that houses the space agency's control room. As he walks to his car, he shares a few words with Mr Sivan, who then appears to break down. The Prime Minister then leans forward, pats him on the back and pulls him forward for an embrace.

PM Modi, who also said "India did not sleep through the night", has been widely praised on social media, with many holding the moment as an example of humility and outstanding leadership.

ISRO's Kannada account described it as "A lesson in inspirational leadership".

Just watched @narendramodi ji's address to the ISRO scientists, technicians and other employees! A lesson in inspirational leadership indeed! For me this is the most defining picture/moment!@PMOIndia consoling and standing firm with @isro chairman Dr Sivan! Thankyou Dr Sivan???? pic.twitter.com/qQpXRNMmjy

PM Modi was praised by Daniel Carmon, the former Israeli ambassador to India and Sri Lanka.

What a moment! What a gesture! @PMOIndia@narendramodi@isro#KSivan#Chandrayan2https://t.co/JNj35MYnPB

As Commissioner of Police, I was witness to see the PM consoling a sad Dr Sivan, So much of Leadership, Calmness in Crisis,Restoring Confidence to Learned Scientific Community and creating Hope and Progress for the Nation....Valuable Lessons I learnt today... pic.twitter.com/WriFjL9pET

One Twitter user described the Prime Minister's reaction as "human".

My PM is human.. which is beyond everything.. this is why he is different from others...and this why we chose you sir???? @narendramodihttps://t.co/T2mOxZ9cX5

I am very imotional seeing @isro chief being imotional and hugged & consoled by our beloved PM @narendramodi ji. You both have won millions heart. No matter what is the result we will succeed one day. The whole nation is behind you. Congratulations for achieving this far. https://t.co/HMNmRRNRNN

A third said that a hug from PM Modi was nearly priceless for ISRO.

A hug by the Hon'ble Prime Minister Shri@narendramodi is more than trillion words of appreciation for the #ISROpic.twitter.com/TEQ71COA1U

Another user called the Prime Minister's hug a "heartwarming gesture".

A heartwarming gesture. We shall celebrate our victory someday. And we must not forget to celebrate our achievement today. We stand with you sir. @isro@narendramodihttps://t.co/VQYS2477LM

The Prime Minister was also praised for his display of solidarity with ISRO and the scientists behind the Rs 1,000-crore Chandrayaan 2 project, which remains a success despite loss of contact with Vikram.

Union Ministers Ravi Shankar Prasad and Kiren Rijiju also praised the Prime Minister, with the latter referring to the hug as "the moment when a nation stands tall".

"This is the moment when a nation stands tall, India is with you"- PM @narendramodi ji said to boost the morale of the @isro scientists. pic.twitter.com/s1Ob2n1Fcr

A leader who inspires faith, hope and optimism!
PM @narendramodi gives an emotional hug to @isro Chairman K. Sivan and reaffirms his faith in scientists and engineers of #ISRO and #Chandrayan2 team.
Proud of our scientists!
Proud of our Prime Minister!! pic.twitter.com/27bzzrD2zm

Lunar lander Vikram was scheduled to soft land near the south pole of the moon at around 1.55 am, after a 3.84 lakh km journey that began at the Sriharikota base in Andhra Pradesh on July 22. India had hoped to create history by becoming only the fourth nation - after the United States, Russia and China - to successfully soft land on the moon's surface.

However, as the expected landing time came and went, there were no signs the mission had succeeded. Shortly after, ISRO confirmed that contact with Vikram had been lost.

Prime Minister Modi reacted with praise and encouragement, telling ISRO's scientists "the nation is proud of you".

"There are ups and downs in life. This is not a small achievement. The nation is proud of you. You all have done a big service to nation, science and mankind. I am with you all the way, move forward bravely," he said, after being briefed about the loss of contact with Vikram.

ISRO scientists have also been comforted and praised by Congress leader Rahul Gandhi, who told the men and women behind Chandraayan 2 that their "passion and dedication is an inspiration to every Indian".

Industrialist Anand Mahindra was another person not ready to give up on India's ambitious mission. After ISRO lost touch with the Moon lander, he tweeted, "The communication isn't lost. Every single person in India can feel the heartbeat of #chandrayaan2. We can hear it whisper to us that 'If at first you don't succeed, try, try again."