Bharatiya Kisan Union leader Rakesh Tikait said it is the centre's "ploy" which will not be allowed to succeed. 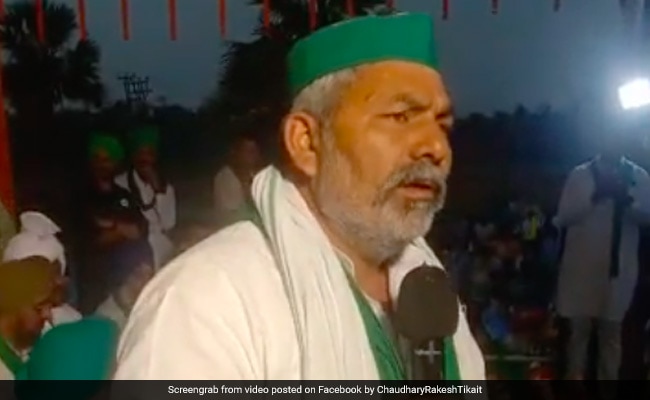 Bharatiya Kisan Union leader Rakesh Tikait on Thursday alleged that the government wants to shift the farmers' agitation centre point from near Delhi borders to Haryana's Jind, a "ploy" which will not be allowed to succeed.

He said farmers will not leave their protest sites on Delhi's borders "at any cost".

"The Central government wants that agitation should shift from Delhi borders to Haryana's Jind. But we will not allow their ploy to succeed," Mr Tikait said after addressing a farmers' gathering.

"They want that the agitation centre point be shifted from Delhi borders to Haryana. But we will not leave Delhi borders at any cost," he added.

Tikait, however, said protests by farmers against three agri laws at various sites, including at toll plazas, in Haryana will continue as before.

Earlier, addressing the gathering of farmers, he said the agitation will continue till the demands of the farmers are met.

With several police cases registered against farmers during the course of their ongoing agitation, Mr Tikait said: "During any agitation, such as this, one should be prepared to go to jail and not be afraid of that."

He said the Samyukta Kisan Morcha (SKM), which is spearheading the ongoing farmers'' agitation, will continue to protest peacefully against the farm laws.

Farmer unions were ready to hold talks with the Centre whenever it decides to resume talks, Tikait said, reiterating that the discussion would have to be about repealing the new farm laws.

"When the government wants to talk, the Samyukta Kisan Morcha will talk," he said.

The SKM, an umbrella body of over 40 protesting farmer unions, had last month written to the prime minister, urging resumption of talks over the three farm laws they have been agitating against since November last year.

Several rounds of talks between farmers and the government have failed to break the deadlock over the three central laws.

A government panel had met farmers' leaders on January 22. There have been no talks between the two sides since January 26 when the farmers'' tractor rally in the national capital turned violent.

Farmers have been camping at Delhi's borders since November 2020 demanding that the Farmers' Produce Trade and Commerce (Promotion and Facilitation) Act, 2020, Farmers' (Empowerment and Protection) Agreement on Price Assurance and Farm Services Act, 2020 and the Essential Commodities (Amendment) Act, 2020 be rolled back and a new law be made to guarantee minimum support price for crops.

The government, however, has maintained that the three central laws are pro-farmer.