Centre On Initiatives To Ramp Up Oxygen Supply Across Country

Piyush Goyal, Additional Secretary, Union Home Ministry, also told a press conference In Delhi that 5,805 MT of liquid medical oxygen is being imported from abroad considering the future needs of the country. 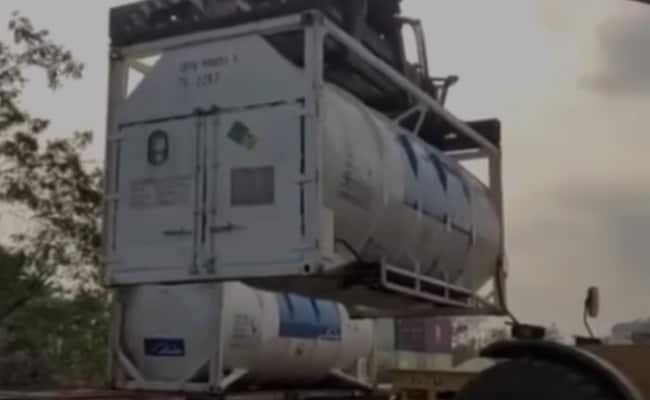 At present, sufficient stocks of oxygen is available in the country, said the Centre. (FILE)

The Centre has taken multiple initiatives to ramp up the oxygen supply across the country, including the airlifting of empty-tankers to reduce the turnaround time and training 500 drivers, a senior Home Ministry official said on Tuesday.

Piyush Goyal, Additional Secretary, Union Home Ministry, also told a press conference In Delhi that 5,805 MT of liquid medical oxygen is being imported from abroad considering the future needs of the country.

Of these, 3,440 MT is being imported from the UAE, 1,505 MT from Kuwait, 600 MT from France, 200 MT from Singapore and 60 MT from Bahrain, according to a presentation shared by the officer at the press conference.

"At present, sufficient stocks of oxygen is available in the country," he said.

Mr Goyal said a fast-track system has been put in place to import oxygen from wherever supply is available.

He said the services of Railways and Air Force are being used for transportation of tankers to reduce the turnaround time.

Since Air Force cannot transport filled tankers, airlifting of empty-tankers is being done to manufacturing sites so that travelling time of one side can be saved, Mr Goyal said.

As many as 374 tankers with 7,049 MT capacity have been airlifted within the country, while 81 containers with a combined capacity of 1,407 MT have been imported through the Indian Air Force, he said.

A total of 157 oxygen special trains have moved 637 tankers across the country, Mr Goyal said.

The Home Ministry had issued orders under the Disaster Management Act for smooth movement of oxygen-carrying vehicles and it had also directed states and Union Territories to provide adequate security to tankers and set up green corridors to ensure their faster movement, the officer said.

"Since COVID has affected all including drivers of these tankers, training of drivers is being done to ensure availability of skilled drivers. 500 such drivers are being trained now and thereafter 2,000 more will be trained," Mr Goyal said.

A virtual control room with senior Central government and states/UTs officers has been set up to share information/problems and immediate solutions on real-time basis are being provided round the clock, he said.

The Home Ministry also said in a tweet a digital tracking system for real time monitoring has been put in place for tracking the movements of oxygen tankers.

Giving details of the steps taken to address logistical challenges in transporting oxygen, the ministry said 1,408 Argon and Nitrogen tankers have been converted to carry oxygen, while "101 tankers (have been) imported and 150 (are) to come".

The Home Ministry said 100 tankers are being manufactured domestically and 81 tankers with a combined capacity of 1,407 MT have been imported.

The ministry said oxygen production capacity has been increased from 6,817 MT/day in August to 7,314 MT/day at present.