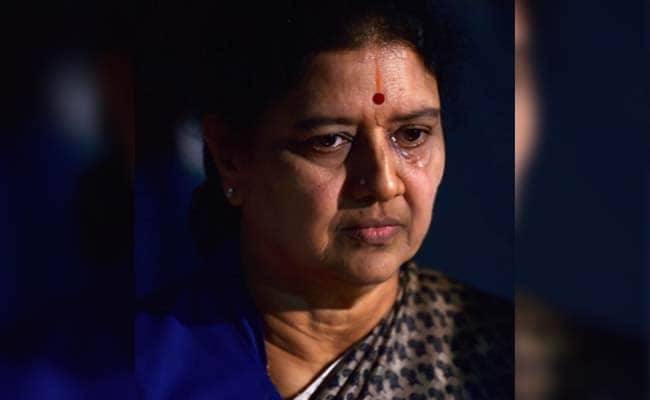 VK Sasikala has filed a review petition in the Supreme Court challenging her conviction.

NEW DELHI: Days after her nephew TTV Dinakaran, 53, found himself behind bars in Delhi, AIADMK general secretary VK Sasikala is making a bid to get out of the Bengaluru jail where she is serving a four-year jail term. On Wednesday, Sasikala filed a review petition against her conviction by the Supreme Court that hauled her off to jail in February, arguing that she could not have been convicted for disproportionate assets as she had never been a public servant.

Sasikala, 61, was found guilty of conspiring with former Tamil Nadu Chief Minister Jayalalithaa, who she lived with, to acquire a nearly 60-crore fortune that did not match their disclosed sources of income. The law bars a convict who serves jail term for over six months from contesting an election for six years after getting out of prison. Before leaving for jail, she had hurriedly appointed Mr Dinakaran as her deputy to run the party in her absence.

But in the 11 weeks that she has been in prison, her nephew too has ended up in a prison in Delhi. And Tamil Nadu Chief E Palaniswami, who was to rule the state as her proxy, agreed to keep Sasikala and Mr Dinakaran out of the party and government, to persuade O Panneerselvam to come back to the ruling party with his party. The talks have hit a roadblock for now, because both Panneerselvam and Palaniswami want the Chief Minister's chair.

The crux of the review petition filed by Sasikala, Jayalalithaa's long-time live-in aide, is that the prevention of corruption law did not apply to her since proceedings against Jayalalithaa had ended due to her death. And hence, irrespective of the court's findings against her, she should be set free to head back home in Tamil Nadu to run the party that she had left to her nephew as her proxy.

It is a point that Sasikala's lawyers had made during the court proceedings before the Supreme Court sent her to jail. But the court had rejected this view.

Also, it is rare for the Supreme Court to accept that a review petition has made a convincing argument.

Review petitions, according to the court's rules, are generally not heard in open court. Instead, the petition is circulated among the judges who delivered the original verdict and are usually decided in the chambers of the judges without any oral arguments. Mostly, such petitions are rejected.

Sasikala's petition comes weeks after the top court turned down a review petition by the Karnataka government that wanted the former Chief Minister to be declared as a convict to enable them to recover the 100 crores penalty. The court, however, clarified that there was nothing stopping the state from recovering the fine.

Promoted
Listen to the latest songs, only on JioSaavn.com
After Jayalalithaa's death in December last year, Sasikala was appointed as the interim party chief and Mr O Panneerselvam as the Chief Minister. But a few days later, she wanted to be the Chief Minister as well and got Mr Panneerselvam to resign. OPS, who had always stood-in for Jayalalithaa in the past did quit, but later decided to fight back; the power struggle split the party and led the election commission to freeze the party's 'two leaves' election symbol.

Mr Dinakaran was trying to get the election commission to rule in his favour; he allegedly tried to bribe Election Commission officials through some middlemen to get the party symbol restored. After spending several days facing interrogators from Delhi Police, a court has sent him to Tihar jail.