Bulandshahr Violence: Yogi Adityanath was quoted in a government press release as telling officers in the meeting: "Tough action needs to be taken against those who carried out cow slaughter." 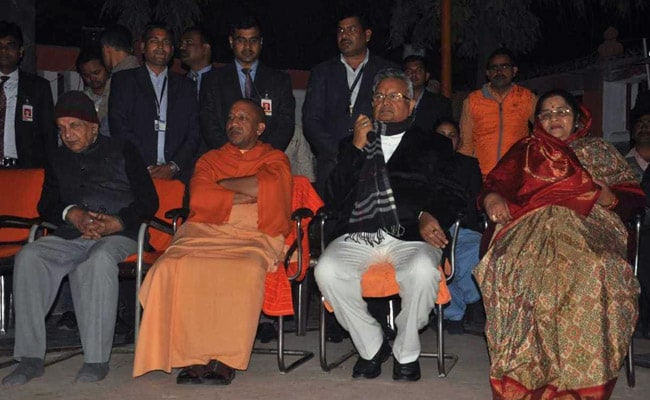 Yogi Adityanath attended a sound and light show on the night of the Bulandshahr violence.

A day after a police officer was killed in mob frenzy over cow carcasses found near a village in Uttar Pradesh's Bulandshahr, chief minister Yogi Adityanath held a late night security review, but kept the focus firmly on cow slaughter. A government statement on the meeting last night indicates he ordered officers to speed up arrests for cow slaughter but was silent on the cop's murder.

A second statement put out this morning said Yogi Adityanath would meet the family of the policeman. The gap between the two statements pointed at damage control, said critics.

Inspector Subodh Kumar Singh was attacked with stones and shot dead by a mob of hundreds that chased his car and surrounded it in a field on Monday evening. The officer and his team had gone to the area to tackle protests after cow carcasses were found scattered in a forest. The mob left more than five policemen wounded, burned down a police station and set several vehicles on fire. A local man was also shot dead in the violence.

The Chief Minister was quoted in a government press release as telling officers in the meeting: "Tough action needs to be taken against those who carried out cow slaughter." Yogi Adityanath reportedly ordered the arrest of everyone related to the slaughter of cows and strict ban on illegal slaughterhouses. There was not a word about the two murders, the statement reveals.

Two cases were filed after the Monday incident - one on the murders and the other on cow slaughter.

Yogesh Raj, the main accused in the mob-killing and an activist of the right-wing group Bajrang Dal, is the complainant in the cow killing case. He is missing. He had named seven people from a village near the spot where the dead cows were found. Two of them are boys, 11 and 12 years old, and four others appear to be fake names.

The children were forced to spend hours in a police station last evening. "The cops brought us to the police station and kept us there for four hours. They took the names of the boys and took my phone number. I was told we would be called again if required," said the father of one of the boys. The boys were not questioned or even detained.

Police sources say any questioning or arrests will take place only after an investigation; they said they were duty-bound to include the names given to them by the cow slaughter complainant (the main accused in the cop's murder).

For the meeting in Lucknow, chief minister Yogi Adityanath flew down from his home-base Gorakhpur, where he attended a sound and light show on Monday night and a kabaddi tournament on Tuesday.

This morning, the chief minister flew out of the state again to perform his other role as the BJP's headline campaigner in state polls. He has three rallies in Telangana, which will vote on Friday along with Rajasthan.