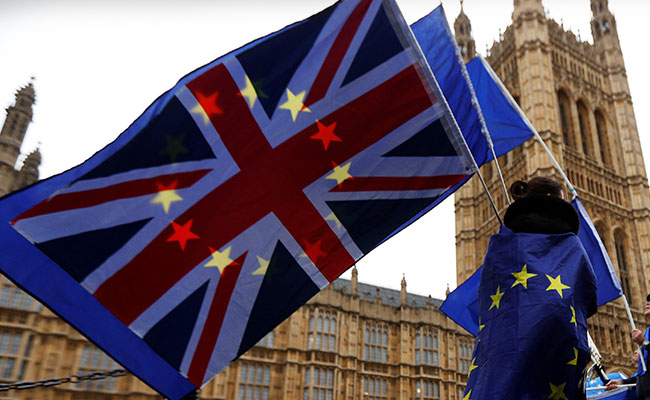 After protracted divorce talks, Britain will leave the EU, which it joined in 1973.

The UK will officially leave the European Union (EU) tonight, a move which was welcomed by Indian businesses operating in the UK as well as British businesses keen to expand in the Indian market.

The official transition period from Saturday until the end of December means status quo in terms of much of the trade and business operations vis-a-vis the UK and EU, but what does change is Britain's free hand to strike new deals and partnerships around the world.

"There's no question that India will be a vital trading partner as the UK charts a new future outside the EU. The golden opportunities for British firms in India play to the best strengths of UK plc - from infrastructure to healthcare to FinTech," said Lord Karan Bilimoria, founder of Cobra Beer and Vice-President of the Confederation of British Industry (CBI) - the key voice of British businesses in the UK.

As someone who campaigned for the UK to remain in the EU in the June 2016 Brexit referendum, the India-born entrepreneur is now focussed on ensuring that the opportunities unleashed by Brexit are fully capitalised and that is where comes a checklist for India.

"To fully capitalise on these opportunities, British firms would like to see further progress in reducing corporate tax rates, data privacy and ease of doing business indicators. If these steps are taken, and the UK maintains an active strategy for engagement and interaction with the Indian economy at all levels, it will remain a significant partner in India's future growth story," notes Mr Bilimoria, who has business interests both in the UK and India.

The end of a 47-year relationship was never going to be easy and the long-drawn divorce process between the UK and EU took a toll on businesses, which operated on a kind of pause mode as Britain missed Brexit deadlines since 29 March last year.

"There was a mess in the handling of the Brexit negotiations, and everyone will just be glad that the mess is over," said Lord Swraj Paul, who heads the London-headquartered Caparo Group with operations worldwide.

"The UK has never been entirely happy with its EU membership. But I don''t think Brexit would have a very major impact on the UK's working with Europe; that relationship remains even if people voted to leave. As far as India goes, it has a relationship with the UK and the EU and both will be strengthened further," he added.

Britain PM Boris Johnson has repeatedly singled out India in the list of countries he wishes to strike an enhanced trade agreement with, ever since he pitched his tent in favour of Brexit. As Prime Minister now with a thumping majority in Parliament, he is seen to be in a position to action some of those promises.

"Prime Minister Johnson will get along very well with Prime Minister Narendra Modi and the two will strike a good rapport. Trade, investment, climate change and immigration will be on top of the agenda for an expected India visit," said Mohan Kaul, President of the Indian Professionals Forum (IPF), who believes the technology, financial services and healthcare sectors particularly stand to benefit in a post-Brexit India-UK tie-up.

GP Hinduja, Co-Chairman of the Hinduja Group, also hails the "exciting time for relations between Britain and India" and enormous scope for both countries to reach a free trade agreement, as he welcomed the "energy and dynamism" already shown by Boris Johnson ahead of the "historic" Brexit Day.

"There are already positive moves like fast track visas to continue to attract top scientists and possible reforms to inheritance tax.

Furthermore, the government should implement more investor-friendly policies to attract new and returning foreign investors and high net worth individuals (HNWI) who have departed over the past few years," said Hinduja, whose diversified group operates across various sectors and borders.

According to fDi Markets data, between 2000 and 2016, the UK invested more than USD 24 billion into Indian industry and between January 2009 and October 2019, a total of 2.78 billion pounds was invested from Indian companies into London alone. This predominance of London is also expected to continue in a post-Brexit scenario.

"In recent years we have seen a large number of Indian businesses choosing London for international expansion and in 2018 the UK capital attracted more investment projects from India than any other global city," said Allen Simpson, Managing Director of Strategy and Corporate Affairs at London & Partners - the Mayor of London's official promotional agency.

"With our mutual strengths in technology and innovation, cities like London, Mumbai and Bengaluru are producing game-changing companies, and as India''s economy goes from strength to strength we see lots of opportunities for collaboration between these two nations," he said.