The arrested persons along with seized mobile phones have been handed over to Manu Bazar police station in South Tripura. 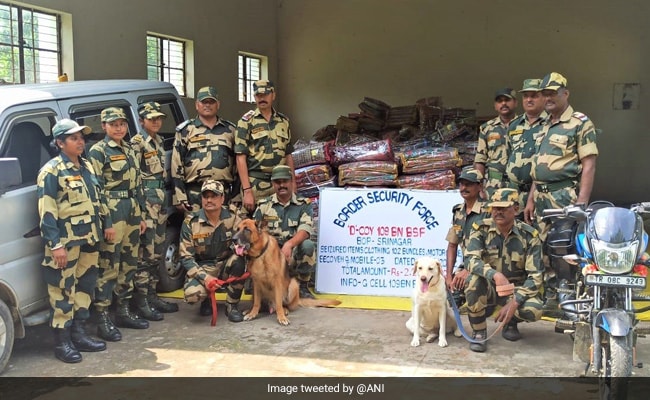 The seized vehicles have been handed over to Customs

The Tripura unit of Border Security Force (BSF) in its 'Special Operations', foiled another trans-border smuggling attempt across the India-Bangladesh International Border and seized items worth more than Rs 2.29 crore and arrested two smugglers, informed the BSF on Sunday.

The arrested people have been idfentified as Madhu Data (55 years) and Pranam Majumdar (35 years). The arrested persons along with seized mobile phones have been handed over to Manu Bazar police station in South Tripura.

"During wee hours of May 14, on specific Intelligence input the troops of BOP Srinagar, Ex-109 Bn BSF conducted a special joint operation along with Police and successfully recovered huge consignment of 102 Bundles containing assorted clothing items along with one van one Motorcycle and three mobile phones having total seizure value amounting to Rs 2,22,98,000 from a Godown in South Tripura's Sabroom", added the BSF.

The seized vehicles have been handed over to Customs- Sabroom for further investigation.