Blog: Telangana gamble may be costly miscalculation for Congress 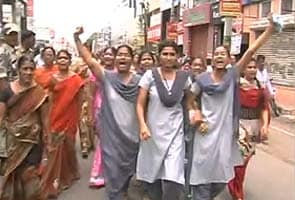 (Dr Parakala Prabhakar is a political commentator and Managing Director of RightFOLIO, a Market Research and Brand Consulting firm in Hyderabad. He is the founder General Secretary of Visalandhra Mahasabha, a group that supports a "united Andhra Pradesh.")

One is its understanding of the nature and strength of the Telangana demand and agitation. And the other one is its electoral calculation.

The Congress Working Committee has departed from its earlier position on the Telangana demand. In 2001, it resolved to constitute a fresh States Reorganization Commission (SRC) to examine several such demands across the country.

The Congress's quick moves on Telangana come against the background of the recent opinion polls indicating that the party is likely to suffer a steep decline in its tally from Andhra Pradesh.

While the party's understanding of the agitation is flawed, the electoral gamble by its strategists might prove to be a costly miscalculation.

There were several distortions, exaggerations, untruths and half-truths about the Telangana agitation that gained currency. The Congress high command seems to have swallowed the propaganda of the separatists that the region is backward, exploited, and dominated by the people from the Coastal and Rayalaseema regions; that the agitation is six decade old; that the Telangana culture is different from the rest of the Telugus; that historically they never were together with the Telugu people from the other two regions; and that the Telangana people spoke a different language.

A careful reading of the Justice Srikrishna Committee Report and a mere glance at economic data, history, political developments and the cultural narrative of the state and the region would have shown that the claims and allegations of the agitation are unsupported.

The electoral performance of the parties that fought on a separatist platform is also unconvincing and uneven since 2004.

The decision is unlikely to yield substantial electoral benefits in 2014 to the Congress. Telangana's electoral pie is small with 17 seats. The Congress will face stiff competition from several parties and end up with a small share of seats. In the Coastal and Rayalaseema regions, the electoral pie is larger with 25 seats. Here the party is likely to be routed because of its decision to divide the state.

Promoted
Listen to the latest songs, only on JioSaavn.com
While the gains for the Congress in Telangana are likely to be uncertain and small, the losses in the other two regions seem to be certain and big.

The Congress party's flawed understanding of the Telangana issue and its electoral miscalculation will guarantee the opening up a huge can of worms across the country. We already see a pervasive clamour for the creation of new states from several parts of the country. These are only likely to increase in intensity and number.

Disclaimer: The opinions expressed within this blog are the personal opinions of the author. NDTV is not responsible for the accuracy, completeness, suitability, or validity of any information on this blog.  All information is provided on an as-is basis. The information, facts or opinions appearing on the blog do not reflect the views of NDTV and NDTV does not assume any responsibility or liability for the same.
Comments
Telangana

Terrorist Killed, Another Surrenders During Encounter In Jammu And Kashmir