Yogi Adityanath is expected to travel to Purulia, around 300 km from Kolkata, by road from neighbouring Jharkhand, which is ruled by the BJP. 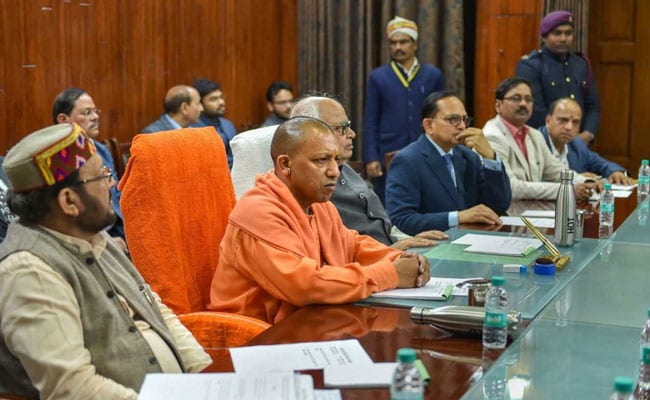 As Uttar Pradesh Chief Minister Yogi Adityanath, denied permission to land his chopper in West Bengal for a rally on Sunday, headed to the state again today, Chief Minister Mamata Banerjee said cuttingly: "Ask him to take care of UP first".

Yogi Adityanath is expected to travel to Purulia, around 300 km from Kolkata, by road from neighbouring Jharkhand, which is ruled by the BJP. Hours before his visit, the BJP posted a sarcastic tweet inspired by a catch-phrase from the blockbuster "Uri": "How's the khauf (fear)?"

Mamata Banerjee, asked about denying permission to Yogi Adityanath's chopper, said: "It's wrong". Speaking to reporters from a stage where she has been sitting on protest since Sunday, she said: "Ask Yogi to take care of Uttar Pradesh first. So many people have been killed, even the police were murdered...so many people were lynched. He (Yogi Adityanath) himself will lose if he contests elections. He doesn't have a place to stand in UP, that's why he's roaming around in Bengal."

On Sunday, the UP chief minister was to address a "Ganatantra Bachao (save the republic) rally" in South Dinajpur district, more than 400 km from Kolkata. Yogi Adityanath's office said permission to land a chopper flying in Yogi Adityanath was "withheld without any prior notice".

Addressing the rally through a phone, the UP Chief Minister he called for the leaders who had attended Chief Minister Mamata Banerjee's January 19 opposition rally to introspect on how "democratic rights were being scuttled" by the state government.

The UP government hasn't commented officially on the logistics of Yogi Adityanath's Bengal visit today, but sources have told the media he will fly to Jharkhand capital Ranchi, take a helicopter to Bokaro and then drive to Purulia, which is near the border with Jharkhand.

The Bengal government's decision to refuse permission to Yogi Adityanath's chopper snowballed into a major controversy and was followed by dramatic developments later in the day. A CBI team tried to question Kolkata police commissioner Rajeev Kumar in a chit fund scam the same evening. The CBI officers were blocked and detained by the police. Later, Mamata Banerjee launched a protest accusing the central government of using the CBI for political vendetta.

"Mamata Banerjee's unconstitutional and unethical actions indicate that democracy is under threat in West Bengal. This atmosphere and situation is very unfortunate," said the BJP's Siddharth Nath Singh, a minister in Yogi Adityanath's cabinet.

Earlier this month, the Trinamool government denied permission to the chopper of Amit Shah on grounds that facilities were inadequate at the Malda airstrip where the BJP president was to address a rally. Mr Shah was forced to opt for a private helipad around the area.