Despite showing no remorse over assaulting a civic official, Akash Vijayvargiya told NDTV that he wishes to keep violence aside and follow in the footsteps of Mahatma Gandhi in the future.

Akash Vijayvargiya was released from the jail in Indore. He was given bail on Saturday.

Akash Vijayvargiya, a BJP legislator and son of senior BJP leader Kailash Vijayvargiya, was garlanded by party workers this morning as he walked out of prison on bail, four days after his arrest for thrashing a civic body official with a cricket bat in Madhya Pradesh's Indore. Party workers had also fired shots in the air at the BJP office on Saturday to celebrate his reprieve.

He was given bail by a special court in Bhopal on Saturday. "I am not guilty or embarrassed about what I did as it was in public interest... I will keep working for the betterment of the region and the public," Mr Vijayvargiya said after he stepped out of the jail. "I pray to god that I should not be given another opportunity to pick up the bat (I pray to god ki vo dobara ballebazi karne ka avsar na de)," he added.

Akash Vijayvargiya went straight to the party office after his release and was garlanded by supporters again. Outside his home where we was welcomed with a traditional aarti, police personnel who were on duty took sweets offered by a supporter of Mr Vijayvargiya.

Mr Vijayvargiya, a first-time BJP legislator who represents the assembly seat of Indore-3, was seen on video assaulting a civic body official in Indore on Wednesday. 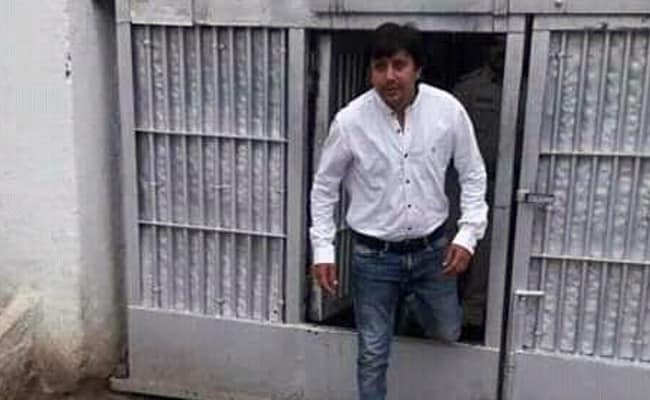 Akash Vijayvargiya is the BJP legislator from the constituency of Indore-3 in Madhya Pradesh.

The young politician and his supporters chased a civic body official with a cricket bat in the presence of policemen and television crews. A video of the dramatic scenes was shared widely on social media, drawing criticism from rival parties.

The official, who was beaten up, was part of a team that was on an anti-encroachment drive in Indore when they were approached by Akash Vijayvargiya and his supporters. "You should leave within five minutes or else whatever happens after that will be your responsibility," Mr Vijayvargiya told the officers. He had alleged that the team of officials dragged and verbally abused women occupants of a residential building.

"I have no regrets for what I have done because I did it with a lot of thought and responsibility. Had I not done it, then the woman's dignity would have been lost in five minutes. She would have her home too," he told NDTV after his release.

Akash Vijayvargiya was arrested for thrashing an Indore civic body official with a cricket bat.

"In the BJP, we've been taught, pehle aavedan, phir nivedan aur phir danadan (first request and then attack)," Akash Vijayvargiya had told reporters after the assault.

However, the BJP legislator today claimed that he doesn't wish to resort to violence again. "I have asked God to ensure that such a situation does not arise in the future. In the future, I would like to walk in the footsteps of Mahatma Gandhi and become a saint dedicated to non-violence... What I did at the time was right, given the circumstances, but I will try my best not to repeat it," he told NDTV.

Akash Vijayvargiya justified the manner in which BJP supporters had picketed the local police station after his arrest, saying that they were "furious". "I went to the police of my own accord and told them that they were free to take action against me as long as they book the civic officials who ill-treated the women at the spot too. But the police acted in a very biased fashion, angering the people. I was the one who defused the situation by asking them to return home," he claimed.

BJP chief Amit Shah, who is also the Union Home Minister had sought a report on the case from the party's Madhya Pradesh unit. Chief Minister Kamal Nath took an apparent dig at the politician, saying, "Cricket bat should be used to symbolise nation's victory, not defeat of democracy."