Despite a notice being served to him by the BJP over his recent remarks, MLA Surendra Singh today said: "A criminal got killed at the hands of a soldier in the firing," referring to the accused. 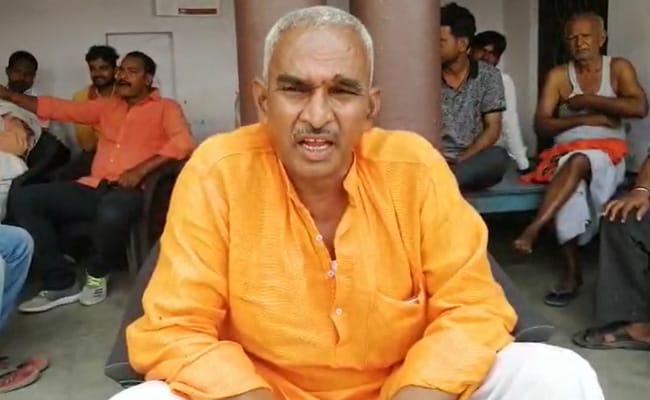 BJP MLA Surendra Singh once again came out in support of a local party leader who has been accused of murdering a man during an event in Uttar Pradesh's Ballia.

The MLA defended Dhirendra Pratap Singh, who allegedly shot dead a 46-year-old man in Ballia district's Durjanpur village following a quarrel over the public allotment of ration shops on October 15. The accused is the district unit president of the BJP ex-servicemen cell.

Despite a notice being served to him by the BJP over his recent remarks, the MLA today said: "A criminal got killed at the hands of a soldier in the firing," referring to the accused.

The Bairia BJP MLA had earlier said Dhirendra Pratap Singh had "opened fire in self-defence" as "it was a do-or-die situation for him".

"Jai Prakash Pal Gama, who was killed in the firing incident, was a criminal. He had four cases of train dacoity against him," Mr Singh said.

"Gama had encroached upon the land of one Lokanath Tiwari in his village and attacked Tiwari when he objected to it," Surendra Singh said, claiming that his party "approved of his stand".

He claimed that he met senior BJP leaders in the past few days and everyone said he was right.

When asked why he has been issued a show-cause notice if the BJP approved of his action, he said this was a tradition.

"Dhirendra Pratap Singh has made a mistake but he is not a criminal. I can even give up my life for the honour of party workers," he said.

The MLA was issued the show-cause notice by state BJP president Swatantra Dev Singh on Monday and given a week's time to respond to it. On Wednesday, Surendra Singh had said that he was yet to receive the notice.

The MLA had also accused the administration of bias and demanded that action be taken against the other side.

So far, 10 people have been arrested in the case. A case was filed against 30 people, most of whom are yet to be identified.