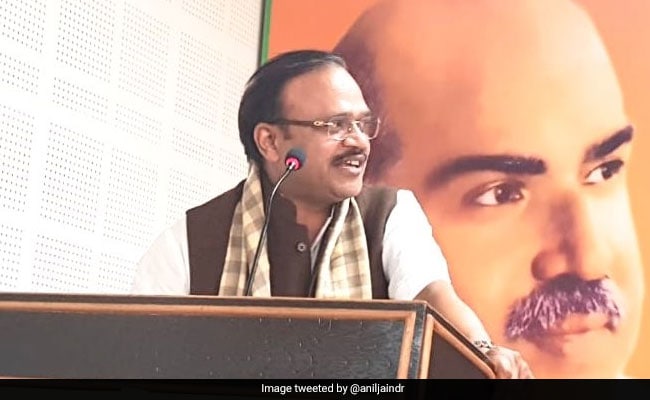 Anil Jain threatened the officials saying, "I'll teach them a lesson in the elections"

A video has surfaced from Madhya Pradesh, which will go to polls next month, in which BJP national general secretary Dr Anil Jain can be seen abusing bureaucrats who were doing their job.

"They have removed our flags. I have just fought with these *****. What do they think? Don't they want to stay here after the elections? I will teach these ***** a lesson in the upcoming elections?" Dr Jain can be heard shouting in the video. NDTV cannot vouch for the authenticity of the video.

Dr Jain and Madhya Pradesh BJP general secretary VD Sharma got angry when Guna deputy collector Vishakha Deshmukh ordered the removal of a banner welcoming BJP president Amit Shah. The banner had been put up on a shop owned by the Guna Municipal Council near Hanuman Chauraha in the city.

The Election Commission's model code of conduct states that political parties cannot put up their publicity material on government properties such as offices, buses or schools. But this enforcement of the model code of conduct didn't go down well with the BJP national general secretary, who ended up threatening the officials.

Dr Jain's tone didn't change even when he was told by one of his aides that he was on camera.

The district collector of Guna Vijay Dutta defended the officials.

"The officers appointed during model code of conduct are doing their duty and they will continue to do it every day. We even removed loudspeakers," Mr Dutta said.

"They can get permission from the sub-divisional magistrate for putting up posters. If a party or candidate is holding a rally and wants to put up posters even outside their private premises, they need to take permission and keep a copy with themselves. Public property cannot be used to put up posters or speakers even if it is taken on rent," he added.

The model code of conduct came into effect as soon as the Election Commission announced the polling schedule on October 6. Voting will take place in all 230 constituencies in Madhya Pradesh on November 28. Results will be declared along with four other states on December 11.