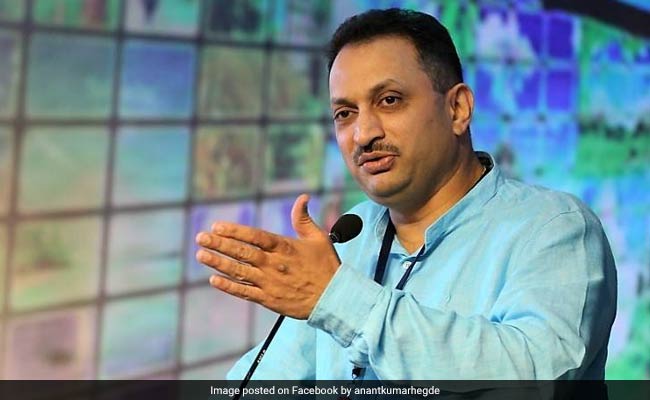 BJP MP Anantkumar Hegde has described the freedom struggle led by Mahatma Gandhi as "drama" and said his "blood boiled" when he read history and "such people came to be called Mahatma".

The former Union Minister from Karnataka, prone to outrageous comments, made these remarks on Saturday at a public event in Bengaluru.

The entire freedom movement was "staged with the consent and support of the British", said Mr Hegde, according to news agency ANI.

"None of these so-called leaders were beaten up by the cops even once. Their independence movement was one big drama. It was staged by these leaders with the approval of the British. It was not a genuine fight. It was an adjustment freedom struggle," the MP is quoted as saying.

"People supporting Congress keep saying that India got independence because of the fast unto death and satyagraha. This is not true. The British did not leave the country because of satyagraha. Britishers gave independence out of frustration. My blood boils when I read history. Such people become Mahatma in our country," Mr Hegde said.

The six-time BJP MP from Uttara Kannada is a repeat offender. A minister in the previous government of Prime Minister Narendra Modi, he was dropped when the BJP was re-elected to power last year.

Before the 2019 election, he controversially called Rahul Gandhi a "hybrid-type", saying "his father is a Muslim, mother a Christian and he himself a Brahmin". He had also declared that "any hand that touches a Hindu girl should not exist".

His remarks on Mahatama Gandhi have been criticised by his grandson Tushar Gandhi and the Congress.

"Hegde is correct in saying Bapu's Freedom Fight was a drama. It was so intense that it opened the eyes of the British to their immoral colonisation and enslavement of India," Tushar Gandhi wrote on Twitter.

The Congress also slammed the BJP leader on social media. Party leader Abhishek Singhvi tweeted, "Awaiting Narendra Modi who invokes Mahatma Gandhi at the drop of a hat especially when repackaging his ideas and to gain international credibility to comment on Mr Hegde who is a senior BJP Leader."

"Only sons of Nathuram Godse can make such comments on Mahatma Gandhi," Congress's BK Hariprasad said.

BJP leaders too found it difficult to defend Hegde on the controversial remarks.

Senior leader Jagdambika pal was cautious in his defence and said, "The whole world knows about Gandhi and it may be his personal opinion."

Whereas senior BJP leaders avoid commenting on Hegde, Union Minister Ashwani Choubey said that Hegde should not have made the comment and added that Gandhi is a well-respected figure in the nation.

Another BJP MP from Haryana Sanjay Bhatia also tried to shy away from making a direct comment and instead said," Congress did not implement what Gandhi preached. It is Prime Minister Narendra Modi who implemented Gandhi''s teachings in letter and spirit."