COVID-19 lockdown: A video clip showing the minister exalting the girl standing in close proximity in gross violation of the social distancing norms has gone viral on social media. 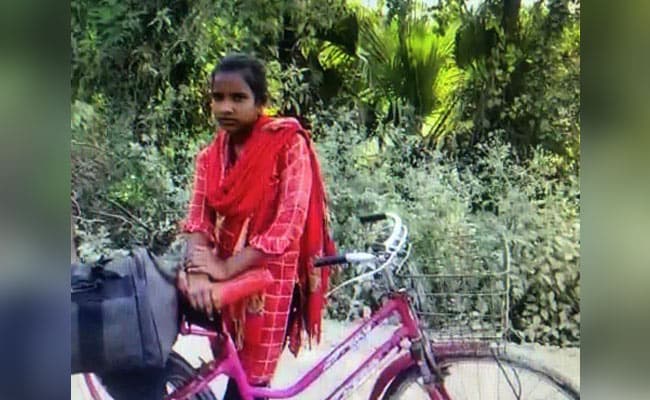 Jyoti Kumari is currently staying at a quarantine centre close to her Sirhulli village.

Bihar's Food and Consumer Protection Minister Madan Sahni has courted controversy when he ignored social-distancing norms while honouring Jyoti Kumari, who cycled 1,200 km from Gurgaon to bring her injured father home in Darbhanga.

A video clip showing the minister exalting the 15-year-old girl in presence of a large number of villagers standing in close proximity in gross violation of the social distancing norms has gone viral on social media.

The opposition has slammed the minister for giving a go-by to the key social distancing requirement against coronavirus and demanded action against him.

The JD(U), however, refused to make any comment other than stating that the minister himself can speak on the issue.

Repeated attempts to reach the minister for his comments did not fructify.

Madan Sahni had on Monday gone to meet and honour Jyoti Kumari at her native village Sirhulli under Singhwara block of the district where the minister gave clothes and an envelope containing Rs 5,000 as a gift, besides revering both the girl and her father -- Mohan Paswan -- by offering them shawl and garlands.

While Madan Sahni was honouring them, he was surrounded by a crowd.

Though the Darbhanga district administration officials are tight-lipped over the issue, the opposition RJD and Congress lapped it up and demanded action against the minister for violating social-distancing norm which the state government has been asking people to follow vigorously as protection against the virus.

Demanding action against Madan Sahni, senior Bihar Congress leader and MLC Prem Chandra Mishra said, "The minister violated the norms of social-distancing framed and vigorously advocated by the state government. Action has been taken against several persons for violating the norm. Following the same rule, action must be initiated against the minister.

"As a minister, it is his responsibility to follow the social distancing norm, but he indulged in cheap publicity for political gains. Its a serious matter and action must be taken against him.

"Chief Minister Nitish Kumar who talks about rule of law should clear his stand on the issue," Mishra said.

Senior RJD leader and party legislator Bhai Virendra said action must be taken against the minister.

He claimed the minister swung into action only after our leaders -- Rabri Devi and Tejashwi Yadav -- lavished praise on the girl.

"You better ask the question to him (minister) as it does not relate to party matters. If Madan Sahni has done something in his individual capacity, then it will be better to take his comment," Ranjan said.

The girl is currently staying at a quarantine centre close to her Sirhulli village. She has caught the world's attention after she bicycled her injured father 1,200 km to reach her native village from Gurugram more than a week ago.