Father Of Bihar Girl, Who Cycled 1,200 Km For Him During Lockdown, Dies

Jyoti Kumari was in Gurgaon visiting her father Mohan Paswan, an e-rickshaw driver, in March last year after an accident forced him to stay at home. 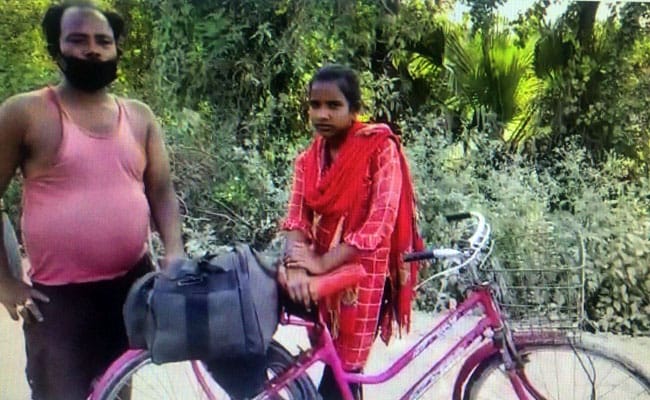 Over a year after Jyoti Kumari cycled 1,200 kilometres from Gurgaon, near Delhi, to Bihar's Darbhanga with her injured father riding pillion during the national lockdown, the 15-year-old girl lost him to cardiac arrest.

Jyoti Kumari was in Gurgaon visiting her father Mohan Paswan, an e-rickshaw driver, in March last year after an accident forced him to stay at home.

Once the lockdown was enforced and public transport shut off, she set off with her father and cycled for seven days, going hungry for two of those, before reaching home; they had so little money she even had to borrow to buy the cycle.

She became the face of migrant workers' plight as tens of thousands of men, pregnant women and children have had to walk, or cycle, hundreds of kilometres to get home.

Jyoti Kumari's remarkable feat earned her the Pradhan Mantri Rashtriya Bal Puraskar. She was also offered free tuition to appear for the IIT-JEE by Anand Kumar, founder of the widely-acclaimed coaching centre Super 30.

Bihar's Lok Janshakti Party also offered to sponsor her education "in any stream she chooses". Jyoti Kumari and her family have also been offered ₹ 1 lakh financial aid by Uttar Pradesh's Samajwadi Party.

The young girl was also called to a trial in Delhi by the Cycle Federation of India. Her father had said that he owed her his life and is proud of his daughter, but is keen she prioritises her education.