Bhim Army chief Chandrashekhar Azad was arrested on December 21, a day after he led a protest against the citizenship law at Jama Masjid in the old quarters of Delhi

Bhim Army chief Chandrashekhar Azad, who was barred from entering Delhi for four weeks as part of his bail terms, will be allowed to return, a court said today, providing certain conditions were met. The Tis Hazari court, which last week had granted Chandrashekhar Azad bail, modified its order and said he could re-enter if a schedule of his movements was submitted, at least 24 hours prior, to senior police officers including DCP (Crime).

Reacting this evening to the court's decision, Mr Azad declared it a "victory for the Constitution" and said he would now focus on stopping the BJP, whom he accused of trying to "tear the country apart", from forming the government in Delhi.

"I welcome the court's decision. This is a victory for the Constitution," he said in a video statement, adding, "I can now visit my brothers and sisters in Delhi... who have been waiting to see me. I can listen to their troubles and try to help them".

Mr Azad, who was filmed holding a copy of the Constitution, also warned the BJP, which is seeking to oust the ruling Aam Aadmi Party from power in Delhi in next month's election, that he was determined to stop them in their tracks.

"... the BJP government at the centre that is trying to tear this country apart.. should not be allowed to form the government in Delhi. I am coming to stop them from winning the election," he said.

Chandrashekhar Azad was arrested December 21, a day after he led an anti-citizenship law protest at Delhi's iconic Jama Masjid, and charged with arson, rioting and inciting violence. He was given bail last week after the court said the Constitution guaranteed his right to protest peacefully and said there was no evidence to the contrary. 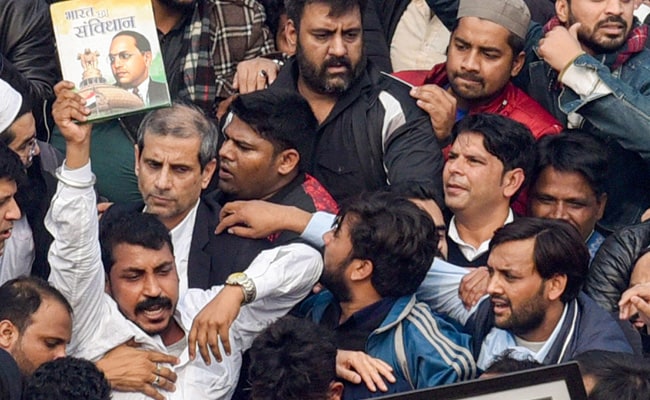 At the protest at Delhi's Jama Masjid, Bhim Army chief Chandrashekhar Azad read out the preamble from the Constitution

On Saturday the Bhim Army chief's lawyers asked the court to reconsider the terms of their client's bail, claiming the restrictions violated some fundamental rights, including the right to participate in elections.

The petition also said that since Chandrashekhar Azad was receiving medical treatment at Delhi's AIIMS, it would not be appropriate to seek permission to re-enter Delhi each time.

In its order the court agreed, recognising concerns over his health and, calling elections the "biggest festival" of democracy, said it would allow him to participate.

The court also responded favourably to other requests that cited his work as a leader of minority communities - a position that necessitated frequent travel, making weekly visits to a police station in Uttar Pradesh's Saharanpur a difficult proposition.

Accordingly, the court directed Mr Azad would have to check in with either UP or Delhi Police, depending on where he was that week. If neither was possible, the court added, authorities would have to be informed via a detailed telephone call giving details of his movement and activities.

Chandrashekhar Azad was given bail last week after Additional Sessions Judge Kamini Lau quoted from Rabindranath Tagore's "Where the Mind is Without Fear" and said citizens had a fundamental right to peaceful protests which could not be curtailed by the state. Criticising Delhi Police for failing to produce proof of their charges - that Mr Azad had indulged in inciting violence through speech - she also said: "The only thing he read was the preamble to the constitution, which is a sacred document".

In a dramatic sequence of events last month, Chandrashekhar Azad evaded Delhi Police - who had denied him permission to carry out a protest march from Jama Masjid to Jantar Mantar in the heart of the city - and popped up within the masjid complex shortly after Friday prayers, holding up a copy of the constitution and a photo of BR Ambedkar. He was eventually arrested the following day.

The Citizenship (Amendment) Act, or CAA, makes religion, for the first time, the test of Indian citizenship. The government says it will help non-Muslim refugees from three Muslim-dominated neighbouring countries if they fled to India because of religious persecution Critics say the bill discriminates against Muslims and violates secular tenets of the Constitution.