Most of the around 200 shops gutted in fire in the wholesale market dealt with electronic appliances, a senior police officer said 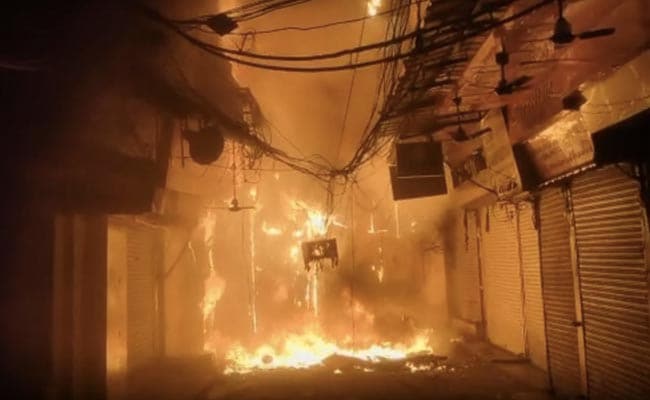 The fire at Bhagirath Palace was reported at 9.19 pm on Thursday

Around 200 shops were damaged in a massive fire at Bhagirath Palace in Chandni Chowk as fire-fighters toiled to douse the blaze for the third consecutive day on Saturday, officials said.

Fourteen fire tenders are at the spot trying to bring the blaze under control, they said.

Most of the around 200 shops gutted in fire in the wholesale market dealt with electronic appliances, a senior police officer said, adding a case under IPC sections 285 (negligent conduct with respect to fire or combustible matter) and 336 (act endangering life or personal safety of others) has been registered against unknown people.

He said a multi-disciplinary committee had been constituted to look into ways to effectively address these issues with the active involvement of residents and other stakeholders in areas like Chandni Chowk, Sadar Bazar, Pahar Ganj and others.

A report has been sought within 30 days, Saxena said.

The fire at Bhagirath Palace was reported at 9.19 pm on Thursday.

"The fire was brought under control on Friday morning and the cooling process was underway. But, it again turned massive by the evening," a police officer said.

Traders claimed that they suffered losses of over Rs 400 crore.

According to officials, the narrow lanes and congested area posed a major challenge for them while dousing the fire. Also, there was a shortage of water and the buildings were weak, they said. Five buildings were affected by the blaze and three of them have collapsed, officials said, adding no loss of life or injuries has been reported so far.

According to the fire department, due to a lack of water supply, a remote-controlled machine used in firefighting operations proved to be less effective.

"The narrow bylanes of congested Chandni Chowk made it difficult for the fire tenders to enter the spot. At some places, firefighters were forced to break the barriers which were put up for beautification of Chandni Chowk," said Atul Garg, the director of Delhi Fire Service.

Another challenge was that the fire tenders had to be parked on the roadside as they could not gain access into the narrow lanes of the blaze-affected spot, he said. While traders suspect short-circuit to be the reason behind the fire, officials said the cause of the blaze is not yet known.

In a statement, Confederation of All India Traders (CAIT) secretary general Praveen Khandelwal criticised Chief Minister Arvind Kejriwal and his deputy Manish Sisodia for not visiting the spot.

"December 4 is a deadly date now for Kejriwal and his party. Gross neglect of traders at their hard times is not acceptable at all," Khandelwal said.

Voting for the Municipal Corporation of Delhi will be held on December 4 and the counting is on December 7.